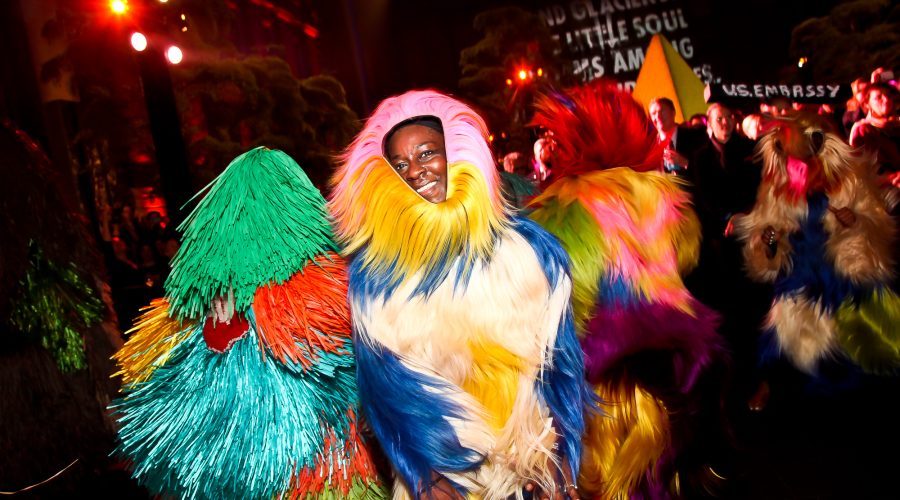 Secretary of State Hillary Clinton climbed to the top of a 20-foot cube made of 4,000 packs of Post-it notes Friday night to get a better look at the party in the National Portrait Gallery’s courtyard. BusinessWeek Senator Roy Blunt, Missouri Republican, and his wife, Abigail, caught up with British Ambassador Peter Westmacott near a yellow pyramid crafted with 1.5 million Crayola crayons. This nexus of the straitlaced and the quirky was pulled together at the Department of State’s Art in Embassies 50th anniversary gala, capping a week of events championing art and culture in international diplomacy. The event was designed by David Stark, who was inspired by building blocks. The company behind Post-its, 3M (MMM), along with Crayola and Coca Cola Co., were among the party’s sponsors. Another benefactor, Benjamin Moore & Co., whipped up a birthday cake, 16 feet around, constructed with 300 cans of Benjamin Moore paint. Art Medals Art in Embassies, modeled on a program begun in 1953 by the Museum of Modern Art, is a public-private partnership that lends works to American embassies and consulates. The evening was a toast to the State Department’s 2012 Medals of Art honorees Jeff Koons, Cai Guo-Qiang, Kiki Smith, Carrie Mae Weems, and Shahzia Sikander. I asked the affable Koons, nursing an arm injured in a horseback riding accident, how he would approach a piece about the fiscal cliff. He said the work would depict “coming out of Plato’s cave. It would be something about enlightenment.” Koons loaned his “Tulips” to the American embassy in Beijing for 10 years. Weems’ work can be seen in Madagascar. Leaders in the arts including D. Dodge Thompson, chief of exhibitions at the National Gallery of Art, chatted with Marcee Craighill, the director of the Diplomatic Reception Rooms. “Meet the Press” anchor David Gregory had a date night with his daughter, Ava. Food stations boasted international cuisine like Peking duck as well as a chocolate demolition bar with gourmet chocolate bricks. (Bloomberg) – Stephanie Green