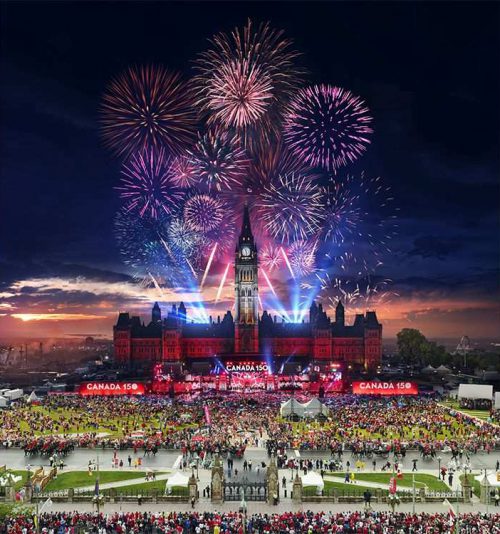 Artsfile.ca – On Canada Day, 2017, while thousands waited in lineups in the pelting rain for a spot on Parliament Hill, someone was watching from a fourth floor window across Wellington Street.

That someone was the well-known American photographer Stephen Wilkes and he was watching and photographing hundreds of images throughout the day on July 1 preparing one of his celebrated ‘Day to Night‘ images as a gift to the people of Canada while we celebrated the 150th birthday of Confederation with a soggy ultimately jubilant party.

On Canada Day, 2017, while thousands waited in lineups in the pelting rain for a spot on Parliament Hill, someone was watching from a fourth floor window across Wellington Street.

That someone was the well-known American photographer Stephen Wilkes and he was watching and photographing hundreds of images throughout the day on July 1 preparing one of his celebrated ‘Day to Night‘ images as a gift to the people of Canada while we celebrated the 150th birthday of Confederation with a soggy ultimately jubilant party.

The piece will be unveiled Thursday evening during the first of this season’s Contemporary Conversations with National Gallery of Canada director Marc Meyer. Before the unveiling, and from the airport in New York before his flight into Ottawa on Wednesday afternoon, Wilkes talked about these monumental images. (The artist also attended a Wednesday night gathering at Ottawa’s School of the Photographic Arts.)

“It was very wet” that day, Wilkes recalled. “We were very lucky to get what we got. But it actually turned out alright. We had a beautiful sunset when the skies cleared” and before the rains descended again.

Wilkes says he has an abiding love of Canada. He has photographed another part of the country, Robson Bight on B.C.’s west coast.

“I had great interest in doing something else in Canada.”

When the U.S. embassy in Ottawa, on behalf of then-ambassador Bruce Heyman and ‘co-ambassador’ Vicki Heyman, approached him about a commission to mark Canada 150 in Ottawa, he was almost immediately interested in the location.

“It had all the elements that I look for when I create these pictures. I love the grandeur of the architecture, I love having the sense of humanity in the foreground and that all these things would be going on during the day and into the night and then the fireworks at the end was the icing on the cake. I felt this had the potential to be a very exciting photograph.”

There is a challenge to “shooting history,” he says. “You can’t go back another day.”

He wasn’t deterred by very up-to-date forecasts that were indeed daunting and featured a deluge with high winds. “We had some very dramatic things happen in terms of light and clouds.”

And he found a location in a building beside the former U.S. embassy on Wellington with a fourth floor office window that opened out onto the Centre Block and the lawn on Parliament Hill.

“Four storeys is almost the ideal height for me to photograph from. We got inside and low and behold I found the exact view I wanted which was dead centre on the Parliament buildings. I was completely protected.” And he had power outlets that were not affected by the inclement weather. (Unlike on the Hill where the place went dark for awhile).

He has nothing but praise for the “sheer will” of those citizens who endured the weather and the red tape to celebrate on the Hill.

“We were photographing for about 20 hours that day and they were there the whole time.”

When he goes about creating a Day to Night image, his goal is to “change time” in a single photograph.

Traditionally a photo has been defined by a single moment.

But, as technology evolved, he realized he could take many moments and fuse them into a single image, with the aid of digital technology.

“I started exploring this concept of “compressing time.”

He sets each of these images in an iconic place such as Parliament Hill.

“Within that context I decide when the day begins and night ends and that’s what I call the time vector. It’s a very exciting concept because it allows me to do a multitude of things” in his pictures. “It’s like putting a face on time.”

This is not a time-lapse image, though. What the viewer is seeing, he says, are individual frames he has taken.

“I’m hyper-focused for 20 hours looking, looking and focused on photographing. I like to say I’m a voracious collector of magical moments.” As he takes up to 1,200 to 2,000 individual images, he’s also shaping the sequence of images that will form a puzzle that will eventually be put together.

He edits those 1,200 down to about 50 images and out of those 50 moments he creates a background upon which another slew of images, that capture what he considers the best moments of the day, are carefully placed in the image. It takes about four months of work after the day to complete. In the Parliament Hill shot, the viewer will experience morning at the bottom of the image and night will be at the top.

Artists have been considering time in their works for many many years. The Impressionist master Claude Monet, for example, painted haystacks at different times of day to explore the changes that light levels cause.

Wilkes thinks about these things. He’s a student of the history of art in general and of photography in particular.

“I think what is happening now with technology and the medium of photography is creating the most exciting period right now in the history of photography.

“If I could get (Alfred) Steiglitz to attend one of my talks today, I’m sure he would want to know how to get” his hands on Photoshop or a digital camera. “(Those earlier photographers) never really cared how they got there, they just wanted to get there. Those guys saw the image before they ever picked up the camera.

“What I have always been excited by is trying to push the medium. How can I use these new tools.”

His work has been referenced by others to paintings. Not surprising then that his artistic vision was inspired by one. It was The Harvesters by Pieter Bruegel the Elder and was painted in 1565. Wilkes saw it for the first time as a 14 year old on a class trip to the Metropolitan Museum of Art in New York.

“The scale in my work is all based on Breugel the Elder. I remember walking up to it and just being spellbound.”

These days he will have several Day to Night projects running at the same time. In the past two years, he’s finished about 20 of these images. It was a pretty intense time.

He is just finishing up one of these commissioned by National Geographic. He has captured bird migrations around the world. Four images will be published in the magazine in February and there will be a museum show along with it, he says.