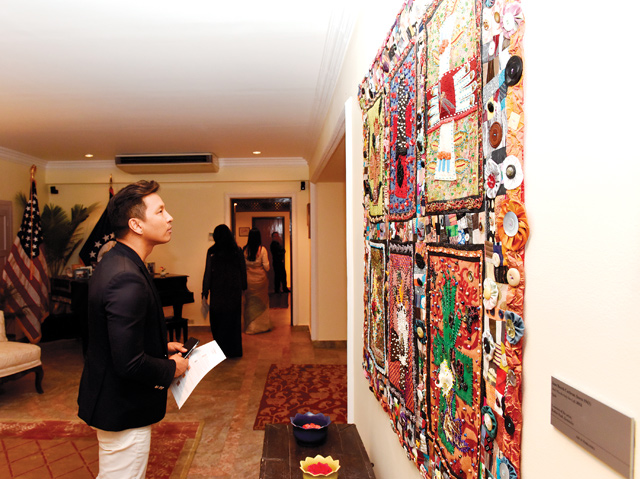 Nepali Times – Every piece tells a story and you can relate to it despite being a Nepali or an American. In the small hallway connecting two wings of US Ambassador Alaina B Teplitz’s living room in Kathmandu hangs Shannon Szczekot’s colour photograph of prayer flags hovering against a backdrop of a blue sky in Colorado. At first glance, visitors think it is a picture from Nepal, and it is this similarity that made Teplitz include the photograph among new works by American artists to adorn her residence in Kamaladi.

“Every piece tells a story and you can relate to it despite being a Nepali or an American,” Teplitz told Nepali Times during a gathering to introduce guests to artworks by 10 American artists curated by Sarah Tanguy of the Art in Embassies Office in Washington DC. Teplitz and Tanguy chose artworks by women and artists from minority groups in the US.
The photographs, paintings and even tapestries make for a diverse collection. From Susan Makara’s Convivial rocks, an oil and metallic leaf painting of cairn rocks in Arizona, to modern interpretations of indigenous culture in Tony Abeyta’s Infinite Wisdom and Crystal Worl’s Into Water, Teplitz has tried to feature glimpses of her native Pacific Northwest.
Two photographs, Szczekot’s Prayer flags over Colorado and Carol Nelson’s Aspen View, a picturesque landscape art with mountains in the background, have been particularly picked because of its similarities to Nepal.

Among the other pieces, Jane Cochran’s Mind Games with its dramatic patchwork adds to the vibrancy of the living room of the residence. Inspired by the tradition of American quilting, Cochran uses the technique of sewing and beading to create a portrait of a woman’s face festooned by her thoughts, dreams and aspirations. Colourful leaves, flowers, butterflies, even monkeys, fish and cats sewed around the face add to its flamboyance.

Tucked away under the staircase of the envoy’s residence is Lisa Cameron Russell’s impressive Praire Cactus painted with layers of latex enamel on gallery-wrapped canvas. From afar, it appears to be three huge yellow cactus flowers. As one draws nearer, the texture of the painting comes to life. A representational painting from a distance, it now becomes an abstract art with beaming colours.

“The works of art express American culture in a small way and give a chance to bring people to the house and talk about art in a different way,” said Teplitz, who has been active in pushing for gender equality since her appointment last year. Her first trip outside the valley was to participate in a Women’s Build with Habitat for Humanity in Kavre.
The evening to introduce the artworks ended on a musical note with Raptivist (rap + activist) Aisha Fukushima and her band performing. Fukushima’s global hip hop project will be conducting workshops across Nepal with youth on freedom of expression and strengthening democracy.
Full Article Link – Nepali Times