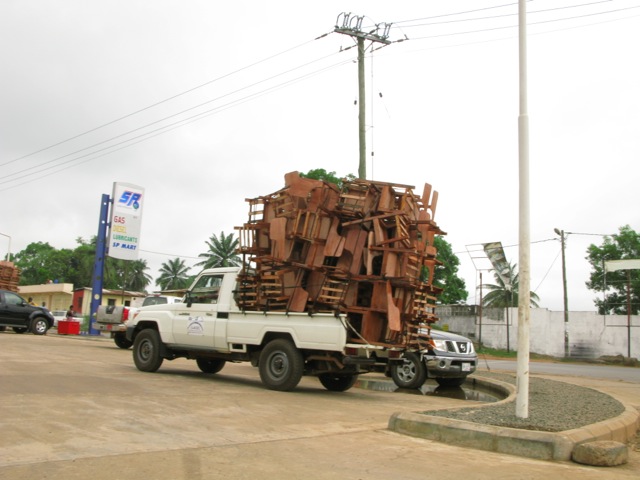 George Mason School of Art – Mason art professors Peter Winant and Tom Ashcraft snapped a picture of a truck in Liberia that was loaded with desk chairs. This picture helped inspire them to create the artwork, “Story.” Photos by Winant and Ashcraft. When Peter Winant and Tom Ashcraft caught sight of the old truck, stacked high with wooden school desks making its way down a dusty West African road, they knew they were on the right path—of creativity. The two, both professors in George Mason University’s School of Art and founding members of the Washington, D.C.-based artist group, Workingman Collective, were in the West African nation of Liberia on a mission.
Happening upon the truck loaded with desks affirmed their idea for creating the artwork: It would represent Liberia’s efforts to use education to uplift the nation after the civil war that tore the country apart in the mid-1980s.
“One of the central parts of the 30-year plan for Liberia’s re-emergence as a middle-class nation is the power of education to transform the society,” Winant says.
“The (truck’s) chairs … were just a ship in the night. No idea where they were headed, but they were so sculptural that we knew we were headed in the right direction in using them as a core form for the sculpture.”
During their three trips to Liberia for the project, the professors learned school desk chairs are commodities to Liberians.
“We heard multiple stories from Liberians who could relate to the desk chair,” Ashcraft says. “They carried them from class-to-class; this seemingly simple piece of standard educational furniture was a very powerful, important and precious object for Liberians. A few people told us of the hundreds of chairs that were stolen from the University of Liberia. The desk chair was ever-present in the landscape when we were traveling for our research and we became aware of its significance in the lives of the Liberians we talked to.”

The artwork also depicts the pepper bird, the national bird of Liberia and the subject of local folklore. According to legend, it is the pepper bird that calls each day at dawn until Father Night releases the Liberian children to Father Day so they can carry out their daily tasks.

The symbolism of the chairs and bird carries over into the community in tangible ways, both men said. Birds are also key part of a work of art by Winant and Ashcraft that’s a little closer to home. Their “Early Bird” sculpture now stands in the new Plaza at Tysons Corner in Virginia.

Although the Liberian artwork was completed in May, Winant and Ashcraft’s work did not stop at the embassy walls, but spilled over into the community.
The previous is an excerpt from an article by Jamie Rodgers. For the full article visit: http://soa.gmu.edu/professors-create-artwork-for-u-s-embassy-telling-liberias-story/