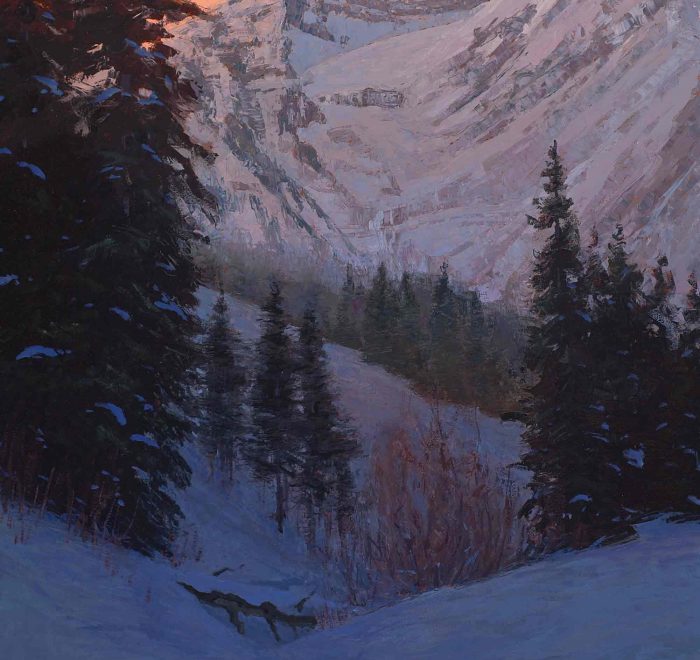 MAPLETON — Steven Lee Adams will soon be receiving a large crate at his studio in Mapleton containing a painting he loaned to the U.S. ambassador to South Africa three years ago. His painting has been hanging in the embassy there as part of the Art in Embassies Program.

In an excerpt from a letter sent to Adams by Ambassador Donald Gips, he thanked the artist and wrote, “As I conclude my tenure as U.S. ambassador to South Africa, I want to thank you for the beautiful artwork you so generously lent to my wife, Liz, and I to display in our residence. Your piece, ‘Winter Evening’ was a gorgeous addition to our home and we have received countless compliments on it. This year marks the 50th anniversary of the Art in Embassies program, an important tool for U.S. diplomacy. As Secretary Clinton said, art provides us ‘with another language of diplomacy, one that evokes our universal aspirations as human beings, our common challenges and our responsibilities for thinking through and addressing the problems that we face together.’ I am honored that we were able to showcase your work to the scores of South African, American and other international visitors we have hosted over the last three years.”

President John F. Kennedy and his wife Jackie started the AIEP in 1964. The program places more than 5,000 works of art on loan in 170 U.S. embassies around the world.

“When Donald Gips and his wife came into my gallery I knew them well since they had been my customers for years,” said Mary Williams, owner of Mary Williams Fine Arts in Boulder, Colo. “He had been appointed as ambassador to South Africa and was looking for art for the embassy. They are not allowed to hang their private collection in the public areas but must choose works from museums and professional art galleries.”

Williams explained that Gips was familiar with Adams’s work and was at the top of the list of artists he was hoping would be willing to participate.

“I happened to have this giant painting by Steven hanging in my gallery and they loved it. It’s an honor to be chosen to participate in the Art in Embassies Program, and Steven agreed to loan ‘Winter Evening — Timpanogos,’ ” she said. “It does mean of course that I lost a sale of an A-plus painting, but Steven and I have an unusual artist and dealer relationship after 17 years together. It’s not common for the artist and dealer to continue working together for so many years but it’s been very rewarding watching my community in Boulder embrace him and love his art.”

The ambassador chose other works of art, including photographs by Edward Curtis, but when the embassy catalogue was published Adams’s painting was chosen for the cover.

Adams was surprised when he was contacted three years ago by representatives of AIEP. “The ambassador chose my painting because he wanted something that reflected the Rocky Mountains and the West,” Adams said. “The paintings help the ambassadors feel at home while they are living abroad and expose international visitors to American art. “This particular painting was from a photo I took after I had finished skiing at Sundance. I was in the upper parking lot area and I saw this image at the end of the day and took out my camera that I carry everywhere for just that purpose. I’m an artist and I look for those images in nature.”

The award-winning Utah artist began his painting career at a young age after being encouraged by his family, especially his grandmother, who recognized his talent when he was in fifth grade. His art teacher at Lakeridge Jr. High encouraged him and he took art classes at BYU, but he didn’t paint full-time until he was 30 years old.

“I had married young and had four children to support,” Adams said. “After my divorce at age 30, I decided I would try and be an artist full-time. My dad, a friend, and Repartee Gallery helped me to be able to paint for nine months and have a show, which launched my career. I try to tell young people it’s not too late to do something. Being an artist can be terrifying. When you have a job you can do your work without a lot of people looking at you all the time, but when you are an artist it’s like running out into the world naked. It takes courage to put yourself out there. It’s worth it when you see people crying and telling you that your paintings touch them.”

Another painting of Mt. Timpanogos by Adams is more familiar to Utah County residents and visitors. He was commissioned to create the paintings of Mt. Timpanogos and Bridal Veil Falls that hang in the entrance of the Utah County Health and Justice Building in Provo. He was surprised to be chosen.

“It was amazing and wonderful,” he said. “I was actually shocked to be asked to do both. It took nine months to get them both done and it was a difficult time for me because my son Brooks had just died in an accident. It became a bittersweet experience.”

For more information on Steven Lee Adams and to see his paintings, visit stevenleeadams.com. He is represented in Utah by Authentique Gallery in St. George, Edelweiss Gallery in Midway, and he will be in the Illume Gallery at City Creek when it opens in the spring. To view the article at its source, click on the following link: http://www.heraldextra.com/news/local/south/mapleton/oil-painting-coming-home-to-utah-from-south-african-embassy/article_50347e8e-9812-5b9e-a57a-91dbe7bc1e81.html