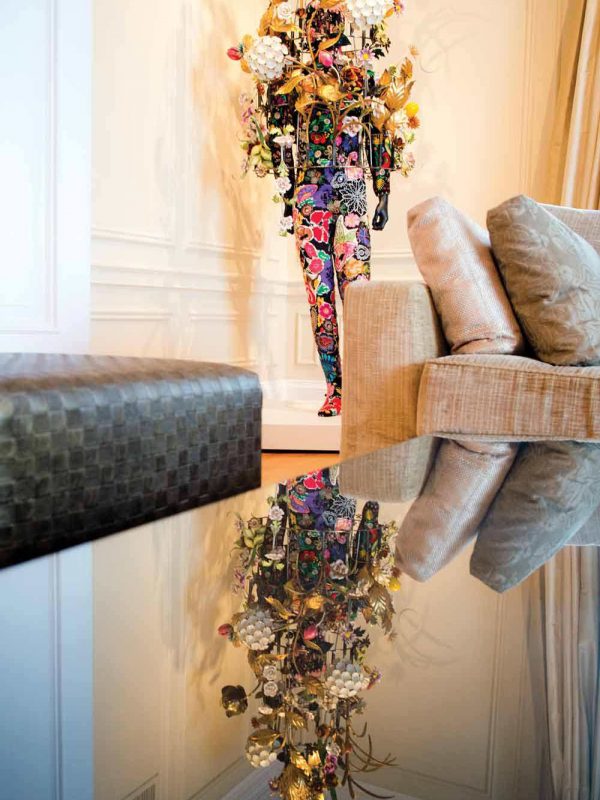 The Ties That Bind

Art in Embassies in Ottawa: The Ties that Bind. When Vicki Heyman and her husband, U.S. Ambassador to Canada Bruce Heyman, want to get away for a few days, they head to Montreal to shop, eat and relax.

“We’ve gone on our own, taken our friends and have been in Montreal on business. I just love it,” says Heyman, who has visited six times touring numerous museums, the Cirque du Soleil headquarters, and has enjoyed smoked meat sandwiches at Dunn’s and Schwartz’s.

Art in Embassies in Ottawa: The Ties that Bind. When Vicki Heyman and her husband, U.S. Ambassador to Canada Bruce Heyman, want to get away for a few days, they head to Montreal to shop, eat and relax.

“We’ve gone on our own, taken our friends and have been in Montreal on business. I just love it,” says Heyman, who has visited six times touring numerous museums, the Cirque du Soleil headquarters, and has enjoyed smoked meat sandwiches at Dunn’s and Schwartz’s.

On a recent weekend with a rare day off, Heyman says she and her husband piled into a car with “bed head and all” to play tourist in town.

With a ready smile and plenty of pluck, she is determined to squeeze the most out of each day of their diplomatic posting to Canada, which they see as a dual job.

“Our whole life has been approached as a team — a yin and yang relationship,” says Heyman, who will celebrate 35 years of marriage in June. “When this opportunity was offered to us, we looked at various tenets of the job and agreed I would hold the cultural pillar. I’ve taken to this like a working job, scheduling myself with multiple projects every day.”

Heyman, who was raised in Kentucky, has spent the past year preparing for a series of discussions called Contemporary Conversations in conjunction with the National Gallery of Canada, Art in Embassies program, U.S. Embassy and State Department. Over the course of 2015, four American artists, whose work is being exhibited at the ambassador’s residence, will take part in a public forum in Ottawa. The first talk kicked off in February with artist Marie Watt.

“If I came here as an observer rather than a participant it would have been a big mistake. I want to leave here feeling like I’ve made a difference, that what I’ve accomplished has value. This is my jam: to build bridges and connect people.”

Her enthusiasm for the project — part of her “co-ambassadorship” duties to connect people through art — is infectious as we walk through the main floor of Lornado, the 32-room residence overlooking the Ottawa River in Rockcliffe Park. As she rattles off historical tidbits about the home, which was built in 1908, she offers colourful background on pieces of art from her personal collection and those on loan.

“You’re going to die when you see the sensation al Nick Cave piece we have from his Soundsuit collection,” she says pointing to the eye-popping, mixed-media artwork from the Chicago-based artist, which incorporates painted metal, cloth, fabric, beads and children’s toys.

“Every artist creates a dialogue when they engage us with their work. Cultural dialogue knows no borders and is the perfect jumping off point to elicit discussions. It’s about connecting and breaking down walls.”

The residence, located a short distance from Rideau Hall, the Governor General’s residence, is an ideal venue for holding gatherings, be it a festive party or a cultural function. The limestone manor sits on 10 acres of prime land with a winding driveway, manicured lawns and pretty gardens. The main floor is divided into several spacious sitting areas and a formal dining room. The Heymans decorated their new home with personal mementos and with furnishings from the embassy.

“Bruce and I tend to lean toward a classic, contemporary American esthetic mixed with a Far East influence in design.”

Although she estimates she’s out at least four nights a week, she has no time for tiredness. Heyman stays healthy by eating well and exercises at home to keep fit. She says the loss of privacy and hectic schedule is offset by the privilege of representing her country.

“It’s a big learning curve and everything we do can have repercussions. We are on social media and have to make sure that the voice we use is authentic. Bruce and I have been given an amazing platform. But it isn’t just about us. We are representing the U.S. and it’s a privilege,” says Heyman, who sits on numerous philanthropic boards back home in Chicago.

“We want to create a community — a big tent filled with people of all demographics and walks of life. We’re Jewish but we decorated our home for the first time ever for a Christmas party. We invited diplomats, media, politicians, people from the Supreme Court and folks we’ve met who wouldn’t normally be invited to an ambassador’s residence.”

The couple, who met and fell in love as classmates at Vanderbilt University in Tennessee, has three children and two granddaughters. At one time or another, all the members of the family have been involved in supporting the Democratic Party in the U.S. with both Vicki and Bruce, a longtime investment banker with Goldman Sachs, playing major roles in helping to raise millions for Obama’s re-election campaign. That effort captured the attention of Obama and led to Heymans’ first diplomatic posting just over a year ago.

“We’ve done two cross-country sweeps of Canada. It’s like we’re in a living classroom. It’s amazing. We share so many of the same values. We want this dialogue to continue even after we leave Canada.”

Story by Janet Wilson for the Montreal Gazette

View all the images and the full story through the link – http://montrealgazette.com/life/urban-expressions/u-s-ambassadors-wife-on-the-ties-that-bind