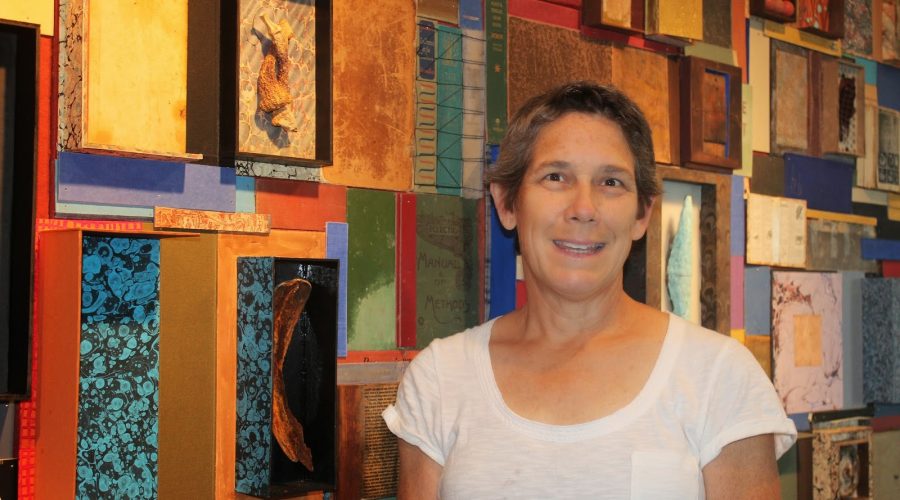 Bangor Daily News- Appleton artist’s ‘Library’ reaches international audience – Artist Abbie Read of Appleton didn’t know what to make of the email that appeared in her inbox in spring 2014.

“It said something like, ‘Hello, I’m with the Art in Embassies program and I’d like to talk with you about sending one of your pieces to hang in a show in Doha, Qatar,’” Read recalled during a recent conversation at her home. “I really didn’t believe it. I thought it was a hoax.”

Bangor Daily News- Appleton artist’s ‘Library’ reaches international audience – Artist Abbie Read of Appleton didn’t know what to make of the email that appeared in her inbox in spring 2014.

“It said something like, ‘Hello, I’m with the Art in Embassies program and I’d like to talk with you about sending one of your pieces to hang in a show in Doha, Qatar,’” Read recalled during a recent conversation at her home. “I really didn’t believe it. I thought it was a hoax.”

But last October, Read found herself not only shipping five heavy panels of her massive wall-mounted sculpture, “Library,” to the U.S. embassy in Doha, but following them there in person to oversee their installation in the official residence of U.S. Ambassador Dana Smith.

The 7-foot-high, 10-foot-long section of “Library,” a colorful, deeply textured, mixed-media montage of books, found objects and other elements, will hang in the ambassador’s residence through the end of Smith’s appointment in two years. It’s just a portion of the larger piece, which is built in 2-foot sections and currently spans some 36 feet.

Read said “Library” has evolved over time, without any kind of master plan or preconceived design.

“Each element, each artistic decision grows spontaneously out of the previous step,” she said.

Objects in the piece are given new significance as they are framed, varnished, stitched in patterns, wrapped in netting, coated in wax and in other ways altered as part of the larger piece.

“I’d like the viewer to take in the title and understand my artistic conception of a library,” Read said. “It’s a resource where you’ll find a collection of stories and images, both familiar and strange; it’s the manifestation of a culture you’re acquainted with.”

Read is one of 10 artists, most with Maine roots or connections, whose work was chosen for the the current Qatar exhibit courtesy of the U.S. Department of State’s Art in Embassies program.

“It is always powerful to see how artists connect with each others’ cultures despite language barriers or different customs,” said Smith, the ambassador, in an email interview. “Qataris really responded to Abbie’s authenticity and passion for her work, traits I think really represent Maine’s personality and Americans more broadly.”

Read is also the only artist in the show who has made the trip to the ultra-modern capital city of Doha and participated in the “artist exchange” element of the program, in which she both led local art workshops and learned more about the artists that live, work and display their art in Qatar. Accompanied by her husband, Bart, Read spent a total of five days in the progressive Arab nation.

Established in 1953 as a program of the Museum of Modern Art in New York, Art in Embassies was formalized as a State Department program by President John Kennedy in 1963. Many prominent artists and illustrators with Maine connections have participated over the years, including N.C. Wyeth, Robert Indiana, Neil Welliver and Alex Katz. Katz is among the 10 artists whose work is on display with Read’s in Doha now.

Participating ambassadors are encouraged to choose a theme for their exhibits. Some might choose a selection of works by the same artist, for example, or a more abstract notion such as the use of light, Smith said. For her, although she is a native Californian and leads the transitional, international life of a diplomat, the decision was made easier by her family’s deep connections to Maine.

“No matter where we are living, or how scattered our belongings are or how disconnected we may feel from home, Maine is like a true north for us,” she said. “When we thought about what kind of art we would like to live with and show the people of Qatar, we just knew that Maine art would capture a part of our own spirit and personality we might not otherwise be able to share.”

“More broadly, the ‘Maine personality’ as seen through art really reflects some of the characteristics that describe us as Americans: independent, bold, risk-taking, innovative and unapologetic,” said Smith.

Although the pieces in the exhibit were selected with the guidance of a professional State Department art curator, Smith said Read’s “Library,” was a must-have. Smith didn’t say how she first saw it, but it resonated. For one thing, she said, books are something of a luxury in many Middle East homes, although Qatar places a high value on education for both men and women.

“It’s something I respect immensely about the government here and gives me hope for the region,” Smith said. “So I thought that ‘Library,’ being made of books, would enable us to talk about education, share our love of books and find common ground with the highly educated population here in Qatar.”

The piece is prominently displayed — “the first thing you see when you walk in,” she said — and has inspired “many, many hours of gazing, discovery and interesting conversation.”

As she does most years, Smith and her family vacationed in Damariscotta this past summer, and made a special trip to visit Read’s studio on Appleton Ridge Road.

“On the way home, we all remarked that she feels like family,” she wrote. “While I have always appreciated art, I had not anticipated that getting to know the artist would make me feel connected to the work in a totally different way.”

Read hopes to return to Doha within the coming year. She has created two additional panels that will reach to the corners of the display wall since the “Library” panels in the show don’t quite fill the space where they’re hung. While there, she also hopes to teach more workshops and hang another exhibit of her work somewhere in the city.

Before its inclusion in the Art in Embassies program, “Library” was displayed in a 2013 show of Maine artists at the Portland Museum of Art as well as at smaller Maine venues.

Read said the experience of dealing with the federal program, having her work appreciated by the international community and interacting with artists from a foreign culture has boosted her confidence in the value of the piece and her own creative process.

“This is further confirmation that this is a major piece, worth sharing and worthy of recognition outside of myself and the midcoast Maine community,” she said.

Mainers who want the “Library” experience without traveling to Qatar will have the opportunity soon when Read installs 10 panels at the Rock and Art Shop on Central Street in Bangor on Sept. 14. The show that will hang through November. A reception and artist’s talk will be held from 6:30 to 7:30 p.m. Friday, Oct. 2, in conjunction with Bangor’s ARTober arts celebration. Link to the full article on Bangor Daily News: https://bangordailynews.com/2015/09/04/living/appleton-artists-library-reaches-international-audience/
– image by Ashley L. Conti | BDN