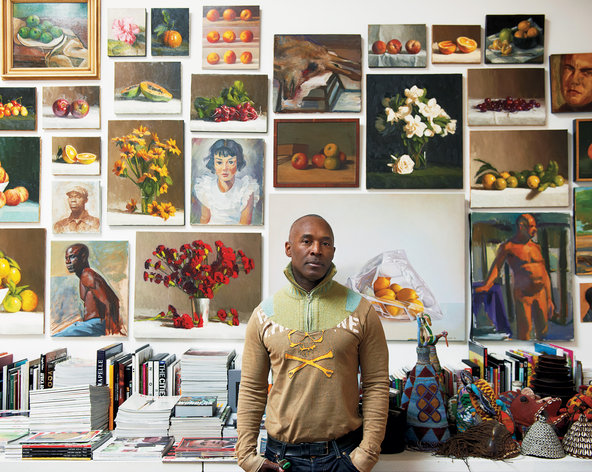 Nick Cave is into fabulous. Take the black marks that scar the floor of his 3,500-square-foot loft in Chicago. “Fabulous,” he says. Or the haunting portrait by the English artist John Kirby that Cave found at an art fair. “Isn’t it fabulous?” So is the porcupine-needle vestment from Cameroon that serves as a dividing screen in Cave’s living room, and the framed quilt backed with love letters in his bedroom, where artworks hung on a yellow wall create so much visual excitement it’s hard to imagine getting any rest.

Definitely high on the fabulosity meter are Cave’s celebrated “Soundsuits,” dazzling (and slightly sinister) armor for body and spirit. Made by hand in the former tire factory where he works and lives, in the Motor Row district of the city’s Near South Side, they are extravagant amalgams of beads, buttons, sequins, sweaters, socks, hooked rugs, fake flowers and knickknacks that together speak the language of both sculpture and fashion.

The first one he made was in 1992, in the aftermath of the Rodney King beating in Los Angeles. Out of a profound distress, he created a sculpture of twigs that covered his face and body, masking his race, age and gender when he put it on. When he moved, it made a sound. That was his aha moment. The subsequent suits — made of raffia, feathers or human hair dyed in colors hot enough to make a Mardi Gras Indian burn with envy — were sometimes wearable, turning the body into a whooshing, clanking or crackling noisemaker. Yet what Cave, 53, wants most for his home is the sound of silence. “When you get quiet,” the artist says, “it’s amazing how much work you can do — on yourself.” His sanctum is a triple-height space with two bedrooms, a professionally equipped kitchen and a living area where three distinct seating arrangements suggest the private club car of a train. That allows just enough room to accommodate the paintings, vintage furniture and objects he collects with nearly the same devotion he has toward his own art. “I’ve made decisions to surround myself with what I believe to be my destiny,” he says. “It’s important for me to wake up to the thing I do.” Coming from a more immodest person, that might sound like pure Midwestern corn pone. But the natty Cave, a professor in the fashion department at the School of the Art Institute of Chicago, is as diligent as his work is flamboyant. Cave is up at 6 every morning for a run along the shore of Lake Michigan and in the studio, two floors below, by 8 a.m. He often works till midnight and has up to 10 full-time assistants to help him meet a bruising exhibition schedule. This month alone he will present 50 sculptures and eight short films in France, at Lille 3000, an international arts festival that opened this week. On Nov. 30, he’ll be in Washington, D.C., to stage a performance for the 50th anniversary of the State Department’s Art in Embassies program. Following that, he’ll be back in the studio to prepare a whole new body of work for a solo show at the Denver Art Museum next summer.

When he does take a break, it’s to cook for himself and, occasionally, a few friends who gather at a table long enough to seat 16. “No parties,” he says. “I’m very shy. An opening is probably my biggest nightmare.” The loft provides an escape. “I can come up here and just settle down. That’s probably the most important thing about it.”

At the front door, it’s immediately obvious that art is Cave’s comfort and his pleasure. The sky-lighted entrance hall is a gallery for works by other African-American artists whom Cave admires — Barkley L. Hendricks, Kehinde Wiley, Zwelethu Mthethwa and Hank Willis Thomas, among them. It leads into the living space, past a guest room and a large office that is another salon. The wall over a worktable stacked with fashion magazines and art books is blanketed by naïve still-life and portrait paintings that came mostly from the Art Student Showcase gallery in New York. Whenever he goes to galleries and art fairs now, he says, “I pray that I’ll find nothing I like.”

Evidently, that prayer has gone unanswered. An eclectic group of contemporary artworks lines the walls of the dining area. Even the center island in the kitchen is partly a pedestal for one of his own assemblages, a wiry spray of porcelain birds and plastic flowers gathered, like all of his art materials and much of his interior décor, from flea markets, secondhand shops or eBay. And he’s an expert shopper. “Love it,” he says, under his breath.

He’s also a historian of his own career. Cave holds on to one piece from his art’s every shift in direction: constructed, abstract paintings in the living room; rough planks hammered with metal scraps in the hall; a vintage blackface lawn jockey beside his bed. Instead of a lantern, the figure holds a branch of battered floral sconces. “He was in a subservient position with the lantern. Now this is an offering. This is no longer a stigma for me anymore,” Cave says. “I’m glad I’m a black man.”

Cave grew up in Fulton, Mo., in a family of seven boys. “All fabulous,” he says. At the Kansas City Art Institute, his studies included a semester of dance training with an Alvin Ailey company member. It now informs his mesmerizing performance videos. In 1990, after earning a master’s degree at the Cranbrook Academy of Art, he began teaching in Chicago.

That’s where he met Jeffery Roberts, the architectural designer who designed the loft. Cave and Roberts were partners in Robave, a popular lifestyle shop that they operated throughout the 1990s, making clothes and restoring furniture for the store’s evolving environments, an experience that clearly influenced the style and contents of the loft.

The living space is where Roberts’s industrial aesthetic meets Cave’s desire for “balance, harmony, relevancy, contentment.” African figures and benches from Jula Dukuray, a dealer friend in New York, are set amid paintings, 19th- and 20th-century American chests, leather armchairs from Crate & Barrel and historical artifacts — a sobering ball and chain, a comic cigarette lighter, a pincushion and thermometer set made from deer hooves — placed on a stack of industrial wood pallets. “I’m interested in that sort of assemblage,” says Cave. For him the mix is a testament to his creativity and the “sense of internal peace within my spirit.”

A version of this article appeared in print on 10/07/2012, on page M284 of the NewYork edition with the headline: High Volume. – photograph of Nick Cave in his Chicago loft by Jason Schmidt. To view the full article at the source, click on this link.