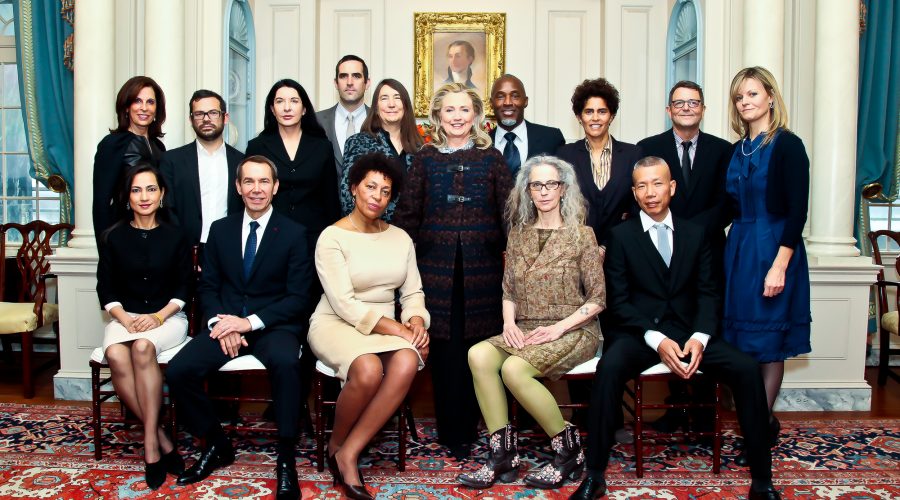 Chinese-born artist Cai Guo-Qiang presents one of his remarkable “explosion events,”where a 40-foot pine tree erupts in a shimmer of fireworks as if in a “tree lighting” ceremony, followed by a cascade of black ink-like smoke that mimics traditional Chinese brush drawings. Fifty years after the Kennedy administration started a small-scale effort to place American art in embassies overseas, Secretary of State Hillary Clinton on Friday celebrated the now wide-ranging effort to foster cultural diplomacy by awarding the department’s first Medal of Arts to five artists. At a 50th anniversary luncheon in the State Department’s richly appointed Benjamin Franklin Room, Clinton said that the Arts in Embassies program was a personally important cause, dating back to her days as first lady. “I’ve spoken frequently about what different kinds of diplomacy we can use to advance our nation’s values and interests,” she told the more than 200 guests. “Sometimes that obviously means old-fashioned diplomacy. Fly to a capital; meet with presidents, prime ministers, foreign ministers, other officials.” Other times, she said, it might mean using the Internet or town halls. “But art is also a tool of diplomacy,” said Clinton. “It is one that reaches beyond governments, past all of the official conference rooms and the presidential palaces to connect with people all over the world.” That less-recognized role is getting a boost from a program that touts its “soft diplomacy” of bringing people together through art that has been loaned by individuals, galleries and museums. Sometimes works are also specifically commissioned for a particular diplomatic site. The program now has more than 10,000 works hanging or exhibited in some way in more than 200 overseas outposts. As part of the celebration Friday, one of the honorees, Chinese-born artist Cai Guo-Qiang, created an “explosive tree” on the National Mall outside the Smithsonian’s Sackler Gallery, which showcases Asian art and is celebrating its 25th anniversary. More than 1,000 people watched as a tall pine Christmas tree, through the magic of pyrotechnics, was suddenly re-created out of black smoke, “like a film negative,” said the artist. A series of small explosions from fireworks in the actual pine tree created the smoke that billowed, formed itself into an ethereal tree, and then slowly drifted away. Cai who now lives in New York, used gunpowder as his artistic medium to create a six-panel artwork at the U.S. Embassy in Beijing. The push for contemporary art in many mediums has come most recently from the program’s director, Beth Dozoretz, a political appointee who became well known as a fundraiser for former President Bill Clinton. Among the works recently installed in the U.S. Embassy in Beijing is a large multicolored tulip sculpture by another medal winner, New York artist Jeff Koons, who has been involved in the Arts in Embassies program since the 1990s. “I think art is always participating. That’s the main drive,” Koons said this week during an earlier event. “Art’s about connections.” Several former government officials said that the impact of that connection across ideology, language and race has become increasingly important. Jane Harman, a former congresswoman from California and now president of the Woodrow Wilson International Center for Scholars, a foreign policy think tank, said that people needed to appreciate “how important culture is as a foreign policy tool.” “More than ever, at a time when U.S. embassies look like fortresses, we need beauty inside,” she said at an event Thursday at the Wilson Center. Indeed, the artwork often starts conversations during the many receptions and social gatherings that are central to diplomatic life. “It’s showing off American art to a country where it’s located and that is very, very good for international relations,” said Joseph V. Reed, an undersecretary-general of the United Nations, who was U.S. ambassador to Morocco in the 1980s, as well as White House chief of protocol under President George H.W. Bush. “Everybody that comes in has to take a look at the walls.” Stuart Bernstein, a former U.S. ambassador to Denmark, said, “People love American art. It’s an icebreaker.” In addition to Cai and Koons, the three other honorees whose works are in U.S. embassies and missions are Shahzia Sikander, a Pakistani-born artist whose miniatures are now displayed in her native country; Kiki Smith, a contemporary artist who works in a variety of mediums; and Carrie Mae Weems, a noted photographer. Read more here: http://www.kansascity.com/2012/11/30/3942256/hillary-clinton-celebrates-marriage.html#storylink=cpy By Maria Recio – McClatchy Newspapers