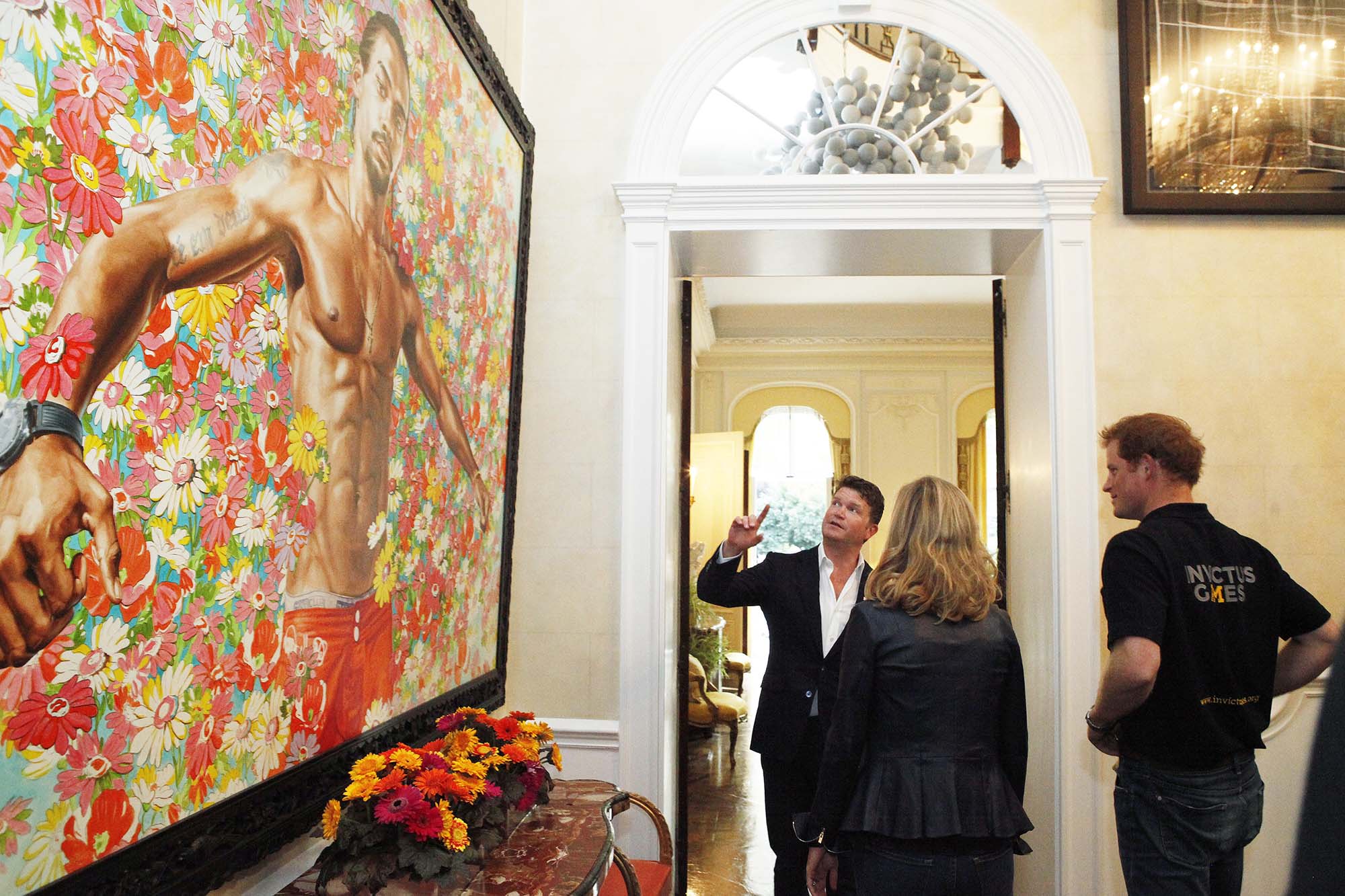 Financial Times - Matthew Barzun, US ambassador to the UK, on informal diplomacy

Financial Times – The US ambassador is excited about the new structure that sits in full view of the entrance to Winfield House, the illustrious residence he occupies amid a sizeable chunk of Regent’s Park in London. “This is a transatlantic skate ramp,” he says, designating the two ledges as the US and the UK and the dip in the middle as the Atlantic Ocean. “I’m convinced this is a good idea.”

Financial Times – The US ambassador is excited about the new structure that sits in full view of the entrance to Winfield House, the illustrious residence he occupies amid a sizeable chunk of Regent’s Park in London. “This is a transatlantic skate ramp,” he says, designating the two ledges as the US and the UK and the dip in the middle as the Atlantic Ocean. “I’m convinced this is a good idea.”

Placing a skateboard ramp — soon to be plastered with garish stickers and graffiti — in front of a historic neo-Georgian mansion, still echoing with the ghosts of Eisenhower and Churchill, might offend some tastes. But it is a typical gesture for a man who has brought a bracing informality to the practice of London diplomacy.
For Barzun, 44, his wife, Brooke, and their three children — twins aged 13 and a son aged nine — Winfield House is a family home. Yet it is also a public space for the exercise of US influence. And the Barzuns have approached the task by upturning the formal rigour of the house, making it a meeting place for rock stars, sixth-form students and graffiti artists, as well as politicians, officials and generals.
At so-called “Winfield House sessions” musicians such as Ed Sheeran, Taylor Swift and Belle and Sebastian have mingled with the likes of David and Samantha Cameron.

Barzun says it is all about “getting people into a different mode”. “They bring their whole selves, not only their work lives . . .  If you do it right, you get the whole person engaged.” It is a strategy the Barzuns have pursued with gusto, welcoming a record 10,750 visitors through the doors last year.

A Harvard graduate, Barzun grew up just outside Boston, Massachusetts, before joining fledgling media company CNET. He later used his technology and media skills to whip up grassroots support and fundraising for Barack Obama’s 2008 presidential election — and was rewarded with the Swedish ambassadorship. Recalled to help with the 2012 re-election campaign, he was then offered London, one of the prizes of international diplomacy.

Dressed in an open-necked, white shirt and navy suit, Barzun leads the way into the main drawing room, adorned with exquisite Chinese wallpaper, deep sofas and a Steinway grand piano once played by Nöel Coward. Bald eagles are everywhere: on lintels, mantelpieces, holding up tables, carved in stone in the garden.

Artworks around the house are sourced from the US Art in Embassies scheme, but Barzun says the selection is highly personal: he and his wife, who is trained as an art therapist, decided they wanted a mixture of US and British works made by living artists.

At the bottom of the main staircase sit two works by the New York-based artist Kehinde Wiley. An imposing bronze bust of a black man faces a picture of another confident looking male, his torso naked, arms spread wide, engulfed in luminous daisies. The radiant canvas acts as a call to order when Barzun comes down in the morning. “I say to myself: ‘Now I have work to do. There’s room for improvement in my life.’”

A house has existed on the site since John Nash laid out Regent’s Park and the mansions bordering it in the early 19th century. At 11 acres, Winfield House has the biggest garden in the capital outside Buckingham Palace. Yet after a fire in 1936 it was entirely rebuilt by its then owner, the Woolworth heiress Barbara Hutton. Used as an RAF barrage balloon unit during the second world war, it was in a poor condition when the fighting ended and Hutton sold it to the US government for a token $1 as a residence for the US ambassador.

There are smaller private family rooms in the house, decorated with pictures from back home in Louisville, Kentucky (Brooke Barzun’s family business is Brown-Forman, maker of Jack Daniel’s and Southern Comfort). A proud cook, Barzun now and then makes burgers or pizza for the family in their own kitchen. “It’s on a more human scale,” he says. Burgers are a minor obsession; he has the Burgerator app on his phone, giving directions to the nearest burger restaurant.

But high politics often intersects with the domestic. Last year, John Kerry, US secretary of state, came to the house to meet Sergei Lavrov, Russia’s foreign minister. Between meetings they emerged on to the terrace and kicked around the football left in the goalposts by Barzun’s children. The seclusion of the house, Barzun says, eases the task of “talking about difficult matters”, even between nations publicly at loggerheads.

Having recently returned from Washington DC, where Cameron held talks with Obama, Barzun gives a glowing status update on the “special relationship”, which he describes as “vital and vibrant”. The historic friendships — Churchill and Roosevelt, Reagan and Thatcher — are important symbols of the relationship, he says, but the connection is also deeply ingrained in commerce and society. “One million Americans wake up every day and go to work for British companies. One million Brits work for American companies,” he says.

And yet US-UK relations, he says, are “so often” nothing to do with what is happening in the US or the UK. “It’s Ebola in Africa, Isil [Islamic State in Iraq and the Levant] in Syria and Iraq, what’s going on with Iran, Russian aggression in Ukraine. [The US and UK] tend to look at the world in the same way in terms of making it more prosperous, more peaceful and more just.”

Barzun may have the diplomat’s skill of engaging people from all walks of life, but he is as blue-blooded as Americans come. His middle name, Winthrop, refers to his forefather John Winthrop, an English Puritan lawyer present at the dawn of the US in 1630.

“At roughly my age he decides to leave his relatively comfortable life in Suffolk to go over as governor of the Massachusetts Bay Colony with 700 or so people, half of whom die in the first winter.” They persist; the country flourishes. It is a story that Barzun’s family told and retold him throughout his childhood.

His ancestor came up again last month in a speech Barzun gave at an event to mark the 800th anniversary of the Magna Carta, in which he said Winthrop had deliberately referred to the document to help create the legal underpinnings of a new society. “He knew that a stable society was built on a fundamental law, so as governor of Massachusetts he called for one that was ‘in resemblance to a Magna Charta’.”

Barzun has yet to visit Lincoln, UK, where clerics were instrumental in writing the charter, but he grew up in Lincoln, a town in Massachusetts named after the English city rather than the US president. Lincoln is also the name of the Barzuns’ dog, a cockapoo, which they acquired after arriving in London.
Since Barzun became a diplomat the US has faced a barrage of criticism, from revelations that the CIA used torture methods such as waterboarding to its widespread surveillance of internet communications. Encountering hostile views of the US is not an unusual experience. In fact, he often seeks them out.

He has visited 50 sixth-form colleges across the UK, asking pupils at each session to write down the good and bad things about the US. He admits he was “totally surprised” by the results on the negative side. “There’s one word and nothing else comes close. Guns.”

He talks to the young people about the historical background to US gun culture — “everyone in America is horrified by gun violence” — but as a non-partisan figure he must tread carefully in a highly politicised debate. “You help them understand that one-third of Americans own three guns, the vast majority of which are normal law-abiding citizens.” Including, he adds, himself.

So far, he has hardly put a foot wrong in his dealings with his host country, apart from eliciting a social media storm last year with offhand remarks about an excess of lamb at British formal functions. “I got myself in quite a steer,” he says, joking that he is still recovering from his faux pas. “I’m on an ‘eating lamb and humble pie’ tour.”

Barzun puts a record on the turntable he has installed in the main reception, says his goodbyes and turns on his heel, leaving the plangent strains of a southern guitar band drifting through the US home from home in London.