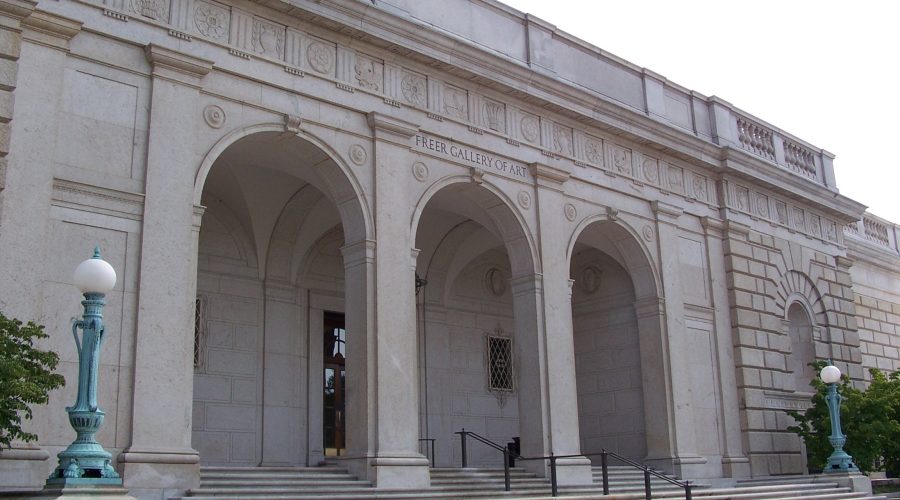 No Longer a Party Divided at Sackler Museum

It’s been a difficult dozen years for Washington socialites, who started planning their comeback last spring, no matter who won the White House: Republican hostesses Ann Nitze and Susan Pillsbury would help Dame Gillian Sackler toss the “The Party of the Year” to celebrate the Sackler Museum’s 25th anniversary. Sackler’s late husband had donated 1,000 works of Asian art to start it, and now Sackler wanted the museum to be as recognized as its Smithsonian upstairs neighbor, the Freer. On the Democratic side, Beth Dozoretz, director of the State Department’s Art in Embassies program, began planning her organization’s 50th-birthday fete from the moment she took over the organization in 2010. Regardless of who won the election, she wanted to celebrate her longtime friend Secretary of State Hillary Clinton. Like everyone else in this fissured city, the two sides weren’t speaking to each other much. At least not until last month, when Chinese artist Cai Guo-Qiang — unaware of the political partisanship inherent in both events and slated to explode a tree on the grounds of the Mall — called Julian Raby, director of the Freer and Sackler Galleries, to ask, “How can I be in two places at once?” “We’ve got a train wreck on our hands,” Raby recalled telling Virginia Shore, chief curator of the Art in Embassies program, when he realized she had commandeered his star attraction. The 54-year-old Chinese artist, who began working in gunpowder to help tell his experiences growing up in China during the Cultural Revolution, was one of five artists to be honored at the Art in Embassies tribute luncheon hosted by Clinton (see story, this page). The seeds for Raby’s train wreck were actually sown long before. In April at the British Embassy, Sackler revealed her plans to toss “The Party of the Year” during the last weekend in November to a room full of mostly Republicans, who at that point were thinking which of their ilk would be in the White House at that point. Dozoretz, a major Clinton and Obama fund-raiser, was in the crowd at the embassy and quietly mentioned that she was also planning a major party for that weekend. And as the divisive presidential election campaign dragged on, the two groups never discussed the conflict or the possibility of working — or partying — together. With only a month to set things right, Raby called Shore and suggested they meet for a drink at the Ritz. “It seemed so bloody obvious,” he said. The talks didn’t start off well when the two curators turned up at different locations. Finally, over martinis at the Georgtown Ritz, they came up with a plan: They would work together and in that way, Cai Guo-Qiang could still explode his tree on the Mall. The Sackler would exhibit Art in Embassies art designed by Asian and Asian-American artists before it was shipped off for installation in U.S. embassies overseas. “We bureaucrats are often working in parallel, completely blindfolded,” said Raby, describing a condition that’s so rampant in Washington it has everyone worried the country is heading off a fiscal cliff. “The success of these two parties shows the importance of meeting face-to-face and just chatting.” On Thursday night in the Sackler Museum, 57 feet underground, Nitze and Pillsbury lined up enough royals to outrank a straight flush with Farah Diba Pahlavi, the former Empress of Iran; Princess Michael of Kent; Prince and Princess Johannes von Auersperg; Baroness Aziza Allard; and Ethiopia’s deposed Imperial Highness Ermias Sahle Selassie and Princess Saba. But the guest who got Washington locals like former Reagan Chief of Protocol Selwa “Lucky” Roosevelt lining up to say hello was Democrat Daisy Soros. She was so popular that museum patrons Jane and Calvin Cafritz took turns sitting next to her. So perhaps it’s time for D.C. denizens to revive those halcyon days when more work was accomplished on the social circuit than on Capitol Hill? “We haven’t done a good enough job with that yet, but we’re working on it,” said Sackler, with a nervous laugh, after the explosion. Behind her, Cai Guo-Qiang’s tree emerged from a dense cloud of black smoke. And despite the weekend of postelection bonhomie, the fate of social Washington looks a lot like Guo-Qiang’s thrice-detonated tree — charred and blackened but still standing.

By Susan Watters for WWD