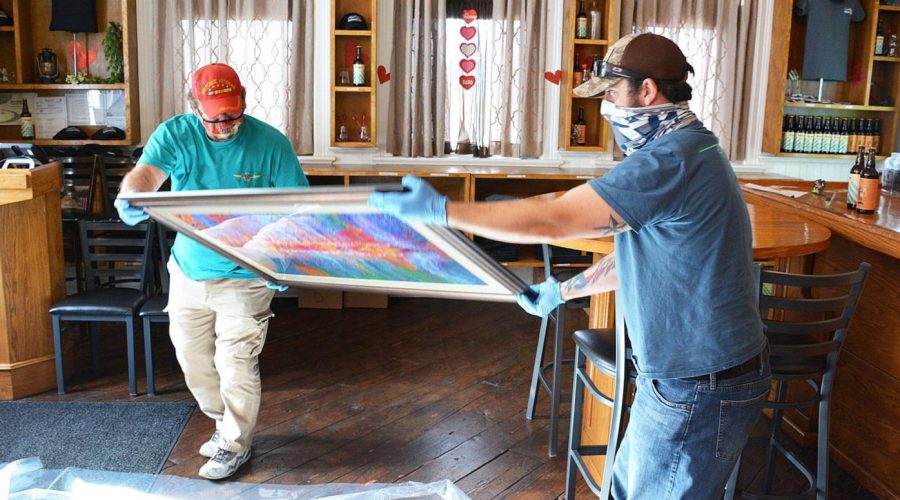 From the Wyoming Valley to Africa, with Pride

Government workers went into the brewery, expertly dismounted a 24-by-36-inch matted, glazed and framed piece of digital photographic art from the brewery wall and lovingly crated it for the first leg of its trip to Burkina Fasou, West Africa, where it will be hung in the official residence of United States Ambassador Sandra E. Clark.

It was a proud moment for the creator, 75-year-old artist Arthur Miller. Commercial photography was a livelihood for Miller for decades, but not a passion.

“I really did commercial work to support my interest in art,” he said in an interview one afternoon at Breaker Brewing Company, where his photographic art is on permanent display.

The artwork Clark selected is described as “a semi-impressionistic view of Frances Slocum State Park, Luzerne County, PA, titled ‘Ducks In A Row.’” Miller said when the curator of the U.S. Department of State, Art in Embassies program emailed him to say his artwork had been selected for embassy display, “I thought it had to be somebody pulling a prank, then the State Department guys came and packaged it up.”

Miller grew up in Parsons, the son of Thomas, a miner at Pagnotti’s Pine Ridge Breaker, and Beatrice Miller. His father, 46 when Arthur was born, died of a cerebral hemorrhage when Arthur was 12.

Widowed with four kids and limited income, Beatrice had to move the family to an apartment on North Main Street.

Though Miller had an uncle, Charlie, who was into photography, his biggest early influence was Andy Palencar, the artwork and painting teacher at Coughlin. Palencar later became the first head of the Art Department at Luzerne County Community College.

After he graduated from Coughlin, Miller joined the Navy.

“I couldn’t swing college,” he said. “I told the Navy recruiter I’d join if he could get me into photography school and it worked.”

Stationed in Holy Loch, Scotland, one of his first assignments, using a 4×5 speed graphic camera, was photographing the birthplace of John Paul Jones, a native Scot and a Revolutionary War U.S. Naval commander, dubbed the “Father of the American Navy.” Miller received a Navy commendation for his John Paul Jones work, which was exhibited at the U.S. Naval Museum in Washington, D.C.

“I was one of four Naval photographers doing PR stuff like officers’ parties,” Miller said. “But much of the work was top secret on the new Polaris submarines, microfilming their ships’ logs and photographing the atomic reactors and missiles on board the subs.”

“I patterned it after the Naval school,” he said.

He started his own commercial art business, Spectrum Studio. He was photographic editor for the Wilkes University and the Geisinger Wyoming Valley Medical Center’s quarterly magazines, contributed to stock photo sites and did traditional work like family portraits and weddings and a myriad of other commercial work.

These days, he has come full circle back to his first love — art.

“I stopped most commercial work,” Miller said. “I’m embracing digital photography. I’m creating new photography and paintings. The digital era opened up a whole new world of art. People are crossing over. Digital made it possible to do everything.”

As a professional artist he has provided thousands of photographic illustrations, nationally and internationally for magazines, brochures, news services, ad agencies, in-house publications and billboards.

On his website, arthur-miller.pixels.com, he describes the day he went to the John Paul Jones home in Scotland.

“Off they went, on a foggy Scottish morning, the coal miner’s kid from Parsons, and his assigned driver to a little cottage near Kirkbean, Scotland. Almost to their destination in Kirkcudbright, the young photographer noticed a little stone church. That small voice in his head spoke to him, as it often did, nudging him to stop and poke around. Inside the main area of the church he saw a beautiful granite baptismal font with a plaque embedded on the front and a photograph on top. Something about an Admiral Harold Stark, U.S. Navy. He snapped a photograph.

“What our young boy did not know then was that Admiral Harold Raynsford Stark, himself a Wilkes-Barre native, was Chief of Naval Operations in Washington at the time of the Japanese attack on Pearl Harbor. He later served as the Commander of the European Naval Forces in 1942, and as a liaison between Prime Minister Winston Churchill and President Franklin D. Roosevelt during World War II. After his retirement, Stark served as chairman of the board of trustees of Wilkes College, now Wilkes University.

“Later on in the boy’s life, he established his own photographic studio (Spectrum Studio) on South River Street in Wilkes Barre. One of his accounts was public relations photography for Wilkes University, where he was asked by public relations director George Pawlush to photograph the Admiral Stark Room at the university’s library. As he photographed the room of the famous Admiral Harold R. Stark, he remembered that little stone church in Scotland.”

Arthur and his wife, June, who he’s known since childhood, have been married 51 years. They have a son and two daughters: Chris, the co-owner of the Breaker Brewing Company; Ivy, who works for Frontier Communications; and Heather, at Collins Aerospace, Florida.