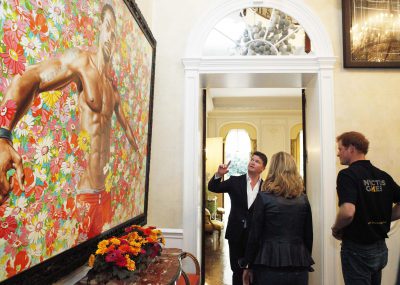 The Art Newspaper – The new US Ambassador to the United Kingdom, Matthew Barzun, and his wife hosted a reception at their official home in London yesterday to unveil a display of works of contemporary art by US and British artists in the grand rooms of Winfield House. The installation of works by American artists, including Kehinde Wiley, Glenn Ligon, Spencer Finch and Roxy Paine, and British artists Cornelia Parker, Susie MacMurray and Julian Stair, has been organised by the Barzuns with Art in Embassies, which is part of the US Department of State. The majority of the works are on loan from private collectors or the artists via their galleries.

Works are found in the two dining rooms, main hall, on the staircase as well as on the terrace of the 35room mansion, which is set in 15acres of garden. Winfield House was built in the 1930s by the Woolworth heiress Barbara Hutton who sold it to the US government for a token $1 in the 1950s.

At the informal event, attended by artists including Tracey Emin, Michael CraigMartin, whose work Untitled Corkscrew, 2012, hangs over the fireplace in the family dining room, Matthew Barzun spoke of the soft power of contemporary art to foster dialogue and understanding. “Cultural diplomacy is no longer an oxymoron,” he said. He praised his wife, Brooke Brown Barzun, for helping him discover contemporary art and its ability to help an uptight New Englander like him and others to relax and open themselves up to different perspectives.

The previous is an excerpt from an article by Javier Pes which appeared online in The Art Newspaper.