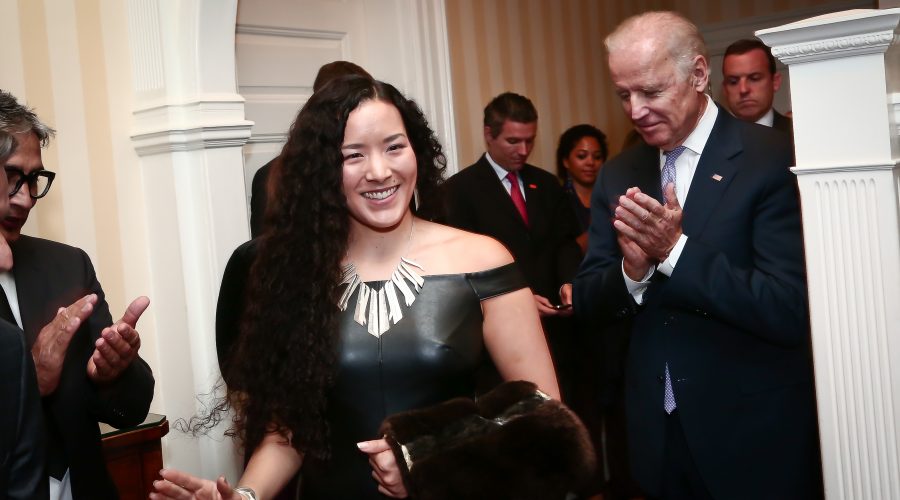 Alaska Public Media – Juneau artist Crystal Worl was one of five Native artists from around the country to show their work at Vice President Joe Biden’s house last month. Worl was commissioned to design a print for the U.S. State Department’s Arts in Embassies program.

“The piece itself is called, ‘Héen,’ which is a Tlingit word for water,” said Crystal Worl.
Its alternate title is “Into Water.” Worl said the design, which is an image of Raven intertwined with a sea spirit, is an interpretation of a dream she had earlier this year.
“I was really, really thirsty in my sleep and I was flying around looking for water and I saw this huge range of mountains and I knew there was water on the other side. So I flew over the mountain and there was this huge body of clear water, and I dove into it to quench my thirst and to soak my feathers in the water,” Worl said.
And then she flew out of the water. “As I flew over the land, the water that was in my feathers began to drip and create rain, because the rest of the world was thirsty. The dream itself reflects an actual Raven story about Raven and water; there is an actual Tlingit story about that,” Worl said.

Worl came up with this design this summer over a period of 12 hours at the Institute of American Indian Arts in Santa Fe, New Mexico, where Worl graduated in 2013.
“I struggled for the first 5 hours. I couldn’t come up with what I wanted to do. I was like, ‘It has to be good, it has to be good,’ and that kind of haunted my creation,” Worl said.

The Institute of American Indian Arts chose five alumni from different regions of the country to produce new work as part of the Arts in Embassies program. Worl was selected to represent Alaska. Prints of her and the four other Native artists’ work will end up on the walls of U.S. embassies and ambassadors’ houses all over the world.
While working on the design, Worl studied books on traditional formline, took pictures of her sketches and consulted with her brother Rico Worl. She wanted to stay true to the art form, but also depict the sensation of underwater movement.
“You can recognize it as traditional design, but you look at the tail feathers and the tips of the claws – they kind of spiral out and curl outward – which is not traditional,” Worl said.

The background of the print is a photo transfer of the shore at Eagle Beach. Worl said she wanted to use an image directly from home. Last month, the U.S. State Department flew Worl to Washington, D.C. She attended a reception at Joe and Jill Biden’s house where her print was framed and displayed. She and the other Native artists were being honored.

“It was unreal,” Worl said. “I remember standing in front of my print while people were approaching and talking to me, and I was just kind of like outside of my body watching myself, like, ‘Is this really happening?’”

As Jill and Joe Biden gave speeches about the exhibit, the artists, including Worl, stood next to them. “The best part for me was that I had my dad there with me and just to see him standing there smiling at me when I’m standing by the podium. I’ve seen him smile at me, but he was just beaming. He was glowing,” Worl said.
Both Worl and her father Rodney Worl got to shake hands with the vice president.
“I just remember my cheeks hurting from smiling, my feet hurting from those awesome heels and I was wearing this beautiful sea otter and seal fur shawl that my Aunt Louise had made and I just remember standing there next to him trying not to wipe my nose because I had otter fur on my nose,” Worl said, laughing.

Worl got to take some of the 33 prints of her work home. One is hanging at Trickster Company, a Juneau art store she co-owns with her brother. She’s selling the print for $2,500.

Worl is 27. She said it never gets old surprising yourself, “You can never tell yourself you’re not good enough for anything because you don’t know that. Just to keep going and keep pushing yourself is ultimately going to be good for you and the success of whatever it is you choose to do.”

Soon after Worl returned to Juneau, she set off for Los Angeles to sell art and she’s now in Seattle to network with galleries and museums.