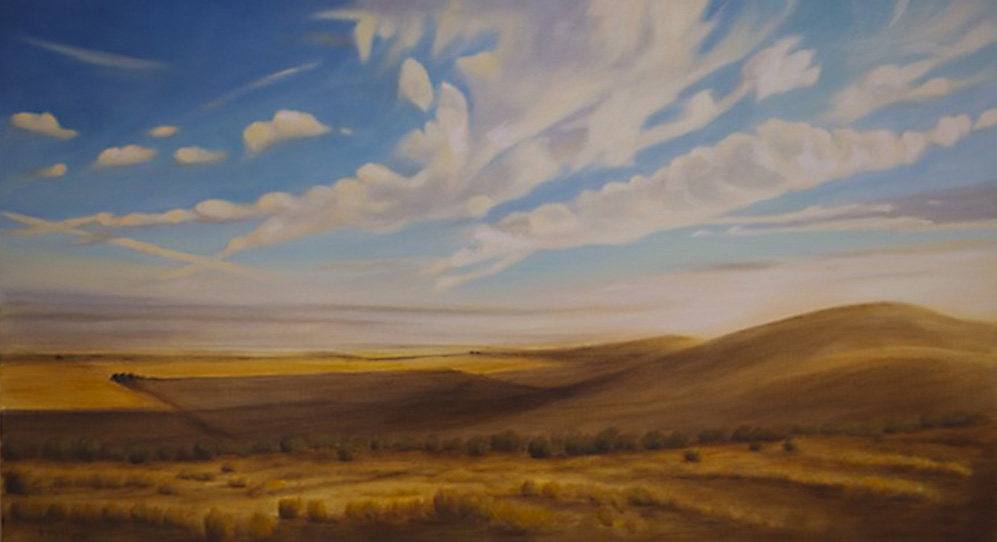 Petrified Forest Ranger Kip Woolford and NPC 2-D Art Professor Peterson Yazzie welcomed and presented the artist to 12 students beginning their second week of Yazzie’s Fine Arts course, along with four non-student observers.
This month’s artist, Lisa McShane, hails from Bellingham, Wash., a coastal town situated just south of Vancouver, British Columbia, and due north of Seattle.
Park officials invited McShane to participate in continuing the Arts In The Park initiative. Founded in 2006 as part of the park’s centennial celebration, the program brings artists to the park to share their inspirations, ideas and artwork with the public.
“I’m a landscape painter, which is why it matters so much where I’m from. Landscapes and the people who paint them tend to be very place based, very interested in the light and the land where they’re from,” she related.
“I’m originally from eastern Washington, which looks a lot like Arizona, like the northern edge of the Sonoran Desert. It’s a fairly high-elevation, dry, eroded landscape,” she said.
McShane shared with her audience that she started painting and drawing as a child, “like most of us do who are interested in conveying the world to other people. When I was about 11, my mother signed me up to go paint at an artist’s studio every Saturday. I would spend all day in his studio painting and it was great.”
McShane noted that she painted off and on in the years that followed, eventually attending art school at Sonoma State University in California, where she studied metal sculpture and oil painting. Her love for fine art and natural landscapes shaped the path of her professional career, where she later worked in conservation politics, elected as a public official to protect lands and the environment.
She fondly reflected, “About 10 years ago, I decided I won’t regret not getting another bill passed, but I would regret not painting paintings.”
She emphasized to the students that, as she grew artistically from that point in her life, persistence and consistency were what helped her to develop dedication to her craft.
“I converted an old garage behind our house into a studio and started painting a lot. Which is what I want to stress to you: If you want to paint, you have to paint a lot. And you have to be really focused and disciplined about it. It’s just one of those promises you make to yourself whenever you’re making your schedule of the week ahead, how you’re going to fit in your painting,” she said.
McShane related that whenever a new U.S. ambassador is assigned to a foreign post, the ambassador transports a select consignment of American artworks to be exhibited at the destination embassy. She enjoyed the honor of having her 2010 oil painting Sun Sets on the Horse Heaven Hills exhibited on loan to the U.S. Embassy in Yemen from 2010 to 2014, and her 2012 oil painting Mountains at Dusk was loaned beginning this year to the Washington State governor’s mansion.

Of her artistic technique, McShane explained to the students that her paintings “take weeks to paint. I want (to incorporate) layers of memory and different ideas.” She expressed that she also draws inspiration from other art forms, such as music, citing American Hip-Hop artist Macklemore as one of her favorite musicians, and specifically called out his song Ten Thousand Hours as “a great song for all artists.” She quoted her favorite verse from the song, “The greats weren’t great because at birth they could paint, The greats were great ‘cause they paint a lot.”

McShane bolstered the students’ confidence by sharing her own struggles in determining subject matter for her works. “I don’t always arrive at the studio thinking, ‘I know just what I’m going to paint.’ I struggle with that still sometimes. It’s something every (painter) struggles with.”
Offering her own sage advice, she noted, “What I would say in terms of finding what to paint is notice what you pay attention to. Throughout the day, what does your eye linger on? What is it before you go to sleep that your mind’s eye is picturing? That’s your red flag. What you are paying attention to is what you love, what stops you in your tracks, that’s what you envision.”