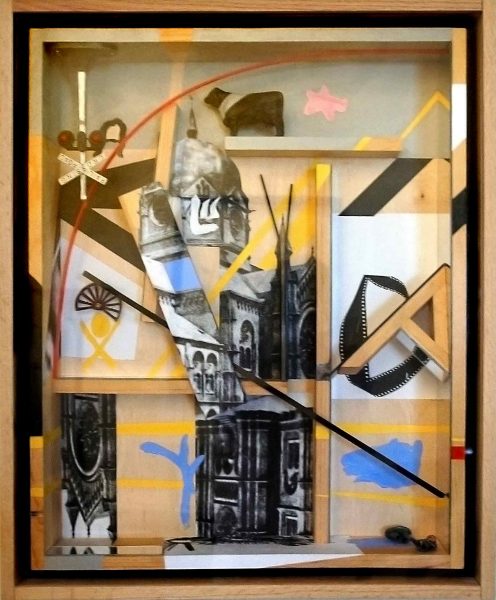 Sally Mansfield, curator with the United States Department of State’s ART in Embassies Program, has chosen an artwork by David Feinberg, University of Minnesota Department of Art associate professor, for display at the U.S. Embassy in Kinshasa, Democratic Republic of Congo.

The artwork, “Life is Struggle,” was made through Feinberg’s “Voice to Vision” collaborative studio project and will be displayed as part of the Kinshasa Embassy exhibition “Voices.” The exhibition addresses the voices and voicelessness of victims of genocide, rape, AIDS, homelessness, poverty and discrimination. It will be displayed for the tenure of U.S. Ambassador James Entwhistle, from spring 2011 to fall 2013.

According to Mansfield, “Professor Feinberg’s ‘Voice to Vision’ project with Holocaust and genocide survivors is a perfect fit for this exhibition. His artwork ‘Life is Struggle’ addresses many issues of the exhibition simultaneously, in an admirably collaborative manner.”

About “Voice to Vision”
The “Voice to Vision” collaborative project, directed by Feinberg, captures the extraordinary experiences of genocide survivors from different parts of the world. The stories of the survivors are first shared through dialogue, and then transformed into works of visual art through painting, drawing, collage and mixed media. Each artwork has been created through collaboration with a team of artists and genocide survivors. As the survivors share their experiences, members of the collaborative team exchange ideas and make creative decisions together to produce a work of art that reflects the convergence of each voice involved in the project.

Description of “Life is Struggle”
All of the survivors and artists in “Voice to Vision” Five were involved in this collaborative piece. It began with a blank, arbitrary background consisting of a woodwork structure and a random design of yellow stripes. The survivors were asked to paint two symbols anywhere on the background.

Fred, from Hanover, Germany, chose the letter “A,” painted in black in the top left corner. “A” stood for the first letter of the name of his only cousin, Aaltje. When Fred and his family fled to America to escape the Nazi regime, baby Aaltje and her family remained behind in Holland. They all were ultimately exterminated at Auschwitz. Fred also chose the model of an old man, in the bottom right corner, which reminded him of an “old wise man.” The figure, which was broken, was fitting with the story Fred told: it was the destiny of so many elderly people to be murdered in the Holocaust.

Ting, from Sudan, chose the symbol “LIS,” painted in white in the center of the piece, which stood for “life is struggle,” and he chose the transparent airplane, which is enlarged in a photocopy on the bottom of the piece. The airplane reminded Ting of a “foreign structure” — something man-made that was interfering with his culture and his people.

Bunkhean, from Cambodia, chose the broken wagon wheel, which reminded him of an ox-cart he was forced to drive in Cambodia and a representation of his broken country. He also chose the symbol of the skull and crossbones, painted in yellow below the wheel, to illustrate death.

Bunkhean’s wife Bounna told her own story, passionately and tearfully. Bounna painted just one symbol, the pink star in the top right corner, which represented “love.”

Christine, a Native American, chose a filmstrip, which symbolized the pornographic films she was forced to participate in as a child, and she chose the railroad crossing sign. Christine said that she has a “certain level of loathing and anxiety” when she sees trains, a feeling she couldn’t verbalize.

Alice, from Rwanda, chose the cow because cows are important animals in Rwanda and are symbols of status. Alice also painted a blue tree at the bottom of the piece, representing a tree outside of her house that was cut down. She painted the tree blue because when she was living in a refugee center, there was a man who would come in and randomly choose which people would live and which people would die. When this man told people, “You, I want you,” the people who were going to die became so frightened their skin turned blue.

After the survivor’s contributions to the piece, the artist team tied the symbols together in a cohesive way.

The artists started with an enlarged photocopy of a synagogue, one of the synagogues destroyed during Kristallnacht, an anti-Jewish pogrom in Nazi Germany from November 9 to 10, 1938. During Kristallnacht, 91 Jews were murdered, and 25,000 to 30,000 were arrested and deported to concentration camps. More than 200 synagogues were destroyed. Fred saw this synagogue — the very synagogue in our piece — burning on the night his father secretly brought home a Torah, the most holy of Jewish writings, which was illegal to possess at the time. “LIS,” or “life is struggle,” became the centerpiece of the dome of the synagogue, and the expanded size of the synagogue connected the other symbols in the piece.