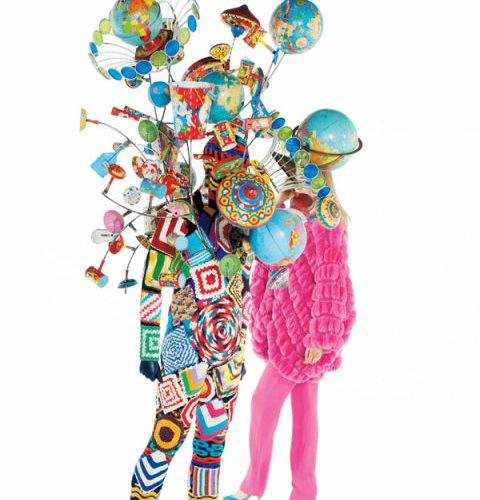 Where the Wild Things Are

Where the Wild Things Are – Batman might have a hard time recognizing the kaleidoscopic suit that he inspired artist Nick Cave to make; for one thing, there are spinning globes instead of a cape. “When Batman hits someone, there are all these words and images that explode,” explains Cave, 53, whose lair is in Chicago, not Gotham. “It’s the space around my head, radiating ideas and thoughts and floating in space.” It’s a fair analogy for the quixotically creative Cave, who finds inspiration in everything from rocket missiles to tree roots and scours flea markets for the buttons, stuffed animals, and crocheted pot holders he uses to make the wearable sculptures he’s dubbed Soundsuits. “You have to be willing to surrender to this otherness,” he says of the experience of wearing one. “Gender, class, race become irrelevant, and you’re forced to view the world without judgment.” Not to mention that they’re heavy. “It’s really very exhausting,” Cave, an Alvin Ailey—trained dancer, says with a laugh. It’s good prep for next month, when he will bring 40 new pieces (including those pictured here) to the Fantastic 2012 art extravaganza in Lille, France. Next up is a dance performance in Chicago, for which Cave is making what he calls “witch-doctor suits.” He’s also toying with leaping to the runway. “Fashion’s got everything covered, but there’s still room for amazing pieces.” Read more: Nick Cave Fashion Editorial – Nick Cave Soundsuits Fashion Shoot – Harper’s BAZAAR