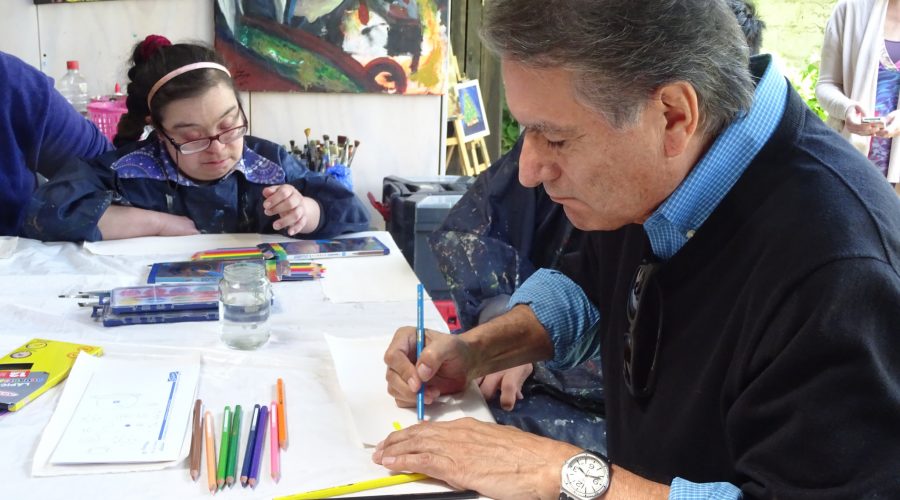 PDAmericas – Arts in Embassies: Promoting Native American Culture – Hopi-Tewa artist Dan Namingha travelled to Chile to carry out a three day program and officially launch the Arts in Embassies catalogue. Dan Namingha has been showing professionally as an artist for over 40 years. His works reflect respect for his ancestry, his homeland, and his people.

His program in Santiago included: exchanging ideas and techniques with local printmakers at Taller 99; visiting galleries showcasing Chile’s contemporary arts scene; giving lectures to art and design students at the University of Chile, the Catholic University, and the American Corner at the Universidad Diego Portales; and discussing his heritage and work on display at the Ambassador’s residence during a reception in his honor for gallery owners, cultural administrators, Fulbright scholars, and representatives of Chile’s indigenous communities.

Namingha also led a workshop with mentally disabled youth at NGO Iluminoarte. The program demonstrated respect and high regard to tribal traditions and expressions and promoted the peaceful coexistence of cultures. This program hit the right tone, as Chile is confronting an indigenous uprising by a handful of Mapuche communities.

The previous is an excerpt from an article that appeared in the October-November edition of “PD Americas” a journal of public diplomacy in the Americas published by the U.S. State Department’s Bureau of Western Hemisphere Affairs.