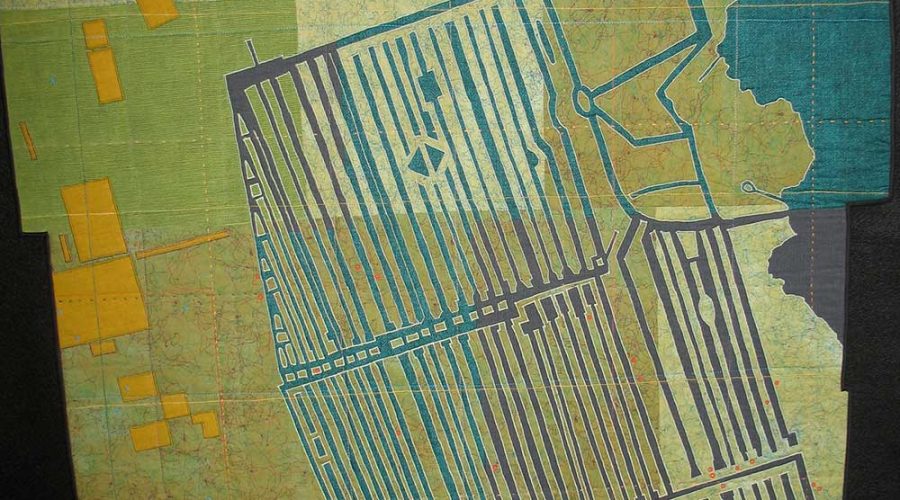 Now, one of Evans’ quilts hangs in the U.S. Embassy in Kigali, Rwanda, part of the Art in Embassies program, an effort to build cross-cultural connections through visual art. It’s on loan there for three years.

That exposure at the annual Smithsonian show has helped the local artist get her name out to the public and raise her profile.

AIE helps raise local artist profiles – When showing her work in Washington D.C. a couple of years ago at the Smithsonian Craft Show, textile artist Leah Evans’ work caught the eye of the U.S. ambassador to Rwanda.

Now, one of Evans’ quilts hangs in the U.S. Embassy in Kigali, Rwanda, part of the Art in Embassies program, an effort to build cross-cultural connections through visual art. It’s on loan there for three years.

That exposure at the annual Smithsonian show has helped the local artist get her name out to the public and raise her profile.

“I’ve had people contact me based on my work from the Smithsonian show,” Evans said. “It’s definitely my most consistent and my best show.”

Evans was one of two Madisonians chosen for the Washington D.C. event, a prestigious exhibition of 121 craft artists from around the country. Milliner Renee Roeder Earley is showing her handmade hats for the first time there this year; it’s Evans’ fourth trip. The exhibition runs Thursday through Sunday.

Taking inspiration from satellite images and maps, Evans creates pieced and detailed quilts that explore human influence on land and water and the reverse: how populations are shaped by their environment.

She’s exhibited at Art Fair on the Square, among other shows, and was also featured in “Stitched Ground: Four Artists Embroider the Land,” at the James Watrous Gallery, an exhibit Capital Times arts writer Lindsay Christians named as one of 2010’s best.

As an artist, Evans said she’s “looking at some point in history or some environmental source and kind of picking it apart… why humans are impacting the land in a certain way and what that means.”

This “environmental history approach” stems from a seminal class she took at the University of Kansas with well-known historian Donald Worster, who recently appeared in the PBS documentary “Surviving the Dust Bowl.”

Before Evans starts work at the sewing machine, she’s doing research. At the root of some of her work are articles she’s read about people and their relationship to the land.

Evans’ piece inspired by the now well-known quilters from Gee’s Bend, Ala., (a collective of African-American quilters who made a splash on the modern art scene several years ago) has its origins in a Pulitzer Prize-winning article by J.R. Moehringer called “Crossing Over,” which detailed the lives of those living on the Bend, a community isolated by geography as well as racism.

In her work, “the pieced sections of land reference the strip quilting of the women and property divisions common to the South,” Evans wrote in an artist’s statement.

A newer piece grew out of an article Evans read in the Economist about geologist Harold Fisk’s 1944 groundbreaking map of the Mississippi River, which charted changes in the river over time.

Evans’ “Fisk’s Ghost” is a riff on that map.

“I just plotted out different river courses all on top of each other — the same river at different times in history,” she said. The work shows “the play between the once-wild river and people setting a new boundary on top of it. We think it’s permanent but it’s be https:// en proven to change as well.”

About 10 of her larger maps will be on display at the show at a time. She will also sell smaller, one-of-a-kind pieces framed in handmade, papier-mache boxes.

Lately, Evans has focused on doing more hand work on her pieces and dyeing more of her own fabric, what she called “the slower processes” of her art.

“I’ve made it a goal of mine to focus more on the work than on the profit,” she said.

“I’m hoping people that have been following my work for awhile who are interested in collecting my pieces will see the new work and feel excited about it,” she said.

And who knows? Her work might attract the attention of another dignitary again.