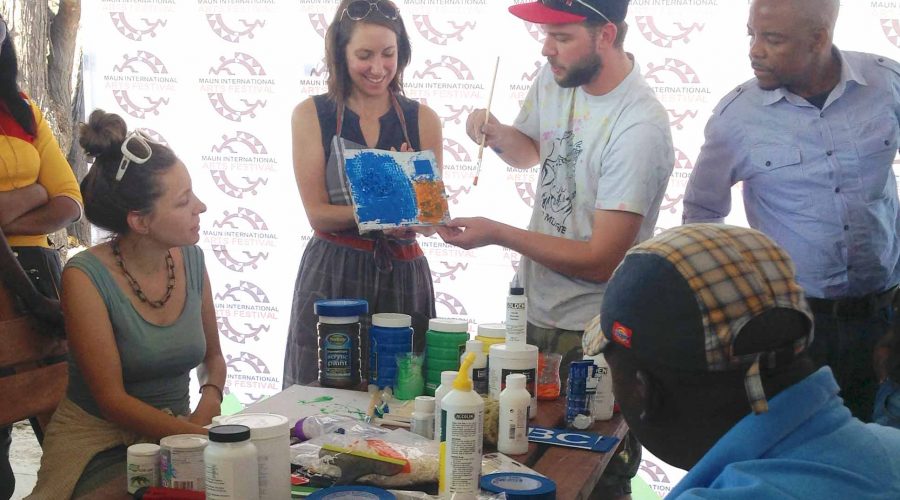 Thapong Visual Arts Centre is a powerhouse of artistic activity in Gaborone. It recently has been refurbished and is now a vibrant arts centre. It holds workshops for resident artists and even has The No 1 Ladies’ Coffee Shop, adding an alluring aroma of coffee wafting in and amongst the iron sculptures, weavings and paintings on the walls.

Thapong Visual Arts Centre is a powerhouse of artistic activity in Gaborone. It recently has been refurbished and is now a vibrant arts centre. It holds workshops for resident artists and even has The No 1 Ladies’ Coffee Shop, adding an alluring aroma of coffee wafting in and amongst the iron sculptures, weavings and paintings on the walls.

This programme aims to have works by American artists shown in American embassies around the world, enabling local cultures to link to America through art. Botswana has benefited from this programme several times over the past years.

Thapong lends itself well to this type of activity. The beautiful, colonial house, with wooden floors, high pressed-steel ceilings and a two-sided verandah induces an atmosphere that stimulates creativity. Out the back door, there is a large, L-shaped gallery, with waist-high walls and a roof on wooden poles – ideal for artists to work in.

In this breezy space, about 40 local artists spent three days in a rich artistic exchange with the young American artists.

The colonial house and the workspace symbolised the artistic tension between the older, more conventional style of art and the newer, more exciting, experimental style. On the walls in the old house there were about 25 paintings, all by local artists. What was striking was the fact that almost all of them were realistic representations of life in Botswana: people, traditional thatched rondavels and the inevitable, rather post-card-type animals. Most of this was attractive, but obviously unrelated to modern art.

Then, out the back door and straight into the workshop space, the walls were covered with A4 papers: the work of the artists under the guidance of the three young Americans.

Here the emphasis was on the abstract. There were brilliant paintings made from superimposed, geometric forms. There were careful studies of pineapples, ginger tubers and green peppers, some of which were abstracted to provide unusual ways of looking at these everyday fruits. And finally, there were patterns and figures appearing out of rough impressions of print-making.

The difference between the ‘accepted’ art in the old house and the vibrance of what covered the walls of the new, open workshop was telling.

At the workshop’s opening public lecture, when the three artists – Ms. Jill Galarneau, Ms. Jacqueline Gleisner and Mr. Peter Clouse, were introduced, Thapong Visual Arts Centre director, Mr. Reggie Bakwena, urged the assembled artists to “learn new directions and possibilities” so that Botswana’s art could “be part of the world”.

That seemed to be the clarion call: we have our ‘accepted’ and ‘realistic’ art. Now learn something of what abstract art means – to draw out the infinite layers that lie beneath the surface.

The American Ambassador to Botswana, Mr. Earl Miller, commented that he had asked for an emphasis on what he called “democratic art”. By this he meant art that did not cost a lot of money and was available to a broad spectrum of would-be practising artists.

American artist Clouse echoed this sentiment, saying that he did not see why he should pay anything to create art. He uses discarded electronic wiring for his weavings. It’s cheap, it’s eco-friendly, and he produces images that people understand straightaway.

The three visiting artists seemed more than up to the challenge of breaking down the walls of the ‘old’, rather stiff, representational style and letting in the fresh breeze of abstraction. Many of the artists at the workshop confessed that they were used to realism, but had found the new way of looking at – and into – objects very stimulating.

The 40-or-so local artists attending the workshop included young people who love art and practise it in their homes or garages, artists who work at Thapong in its many studios, art teachers from local schools and colleges, and even a lecturer from the University of Botswana Physics Department.

The workshop lasted for three days.

The artists were divided into groups, each participating in different workshops – painting, drawing or screen printing. In this way everyone got to spend time with each of the three American artists. Though their techniques were different, each sought to reveal the idea of abstraction.

Comments from the participating artists were excellent endorsements of the workshop and the artistic exchange it generated!

Ms. Tshepiso Mphetolang does hand embroidery in one of the many small workshops at Thapong. She was delighted with the possibilities that abstract shapes created for her embroidery.

Mr. Gopal Jayaraman, a lecturer in Art at the Molepolole College of Education, said that he is always on the lookout for different techniques and for chances to interact with other artists.

Ms. Kelebogile Marope, holding a BA in Sculpture from Rhodes University in South Africa, said she is keen to get into metal sculpture and enjoyed the chance to meet and exchange ideas with the Americans.

Mr. Thabang Matlhaku, a realist artist who works at home and has little formal training in art, said he was excited to see what abstraction could produce, and was keen to try it out for himself.

Mr. Phetogo Phiri, a local art teacher, found the workshop stimulating, as it “jolted me out of my comfort zone”.

Following the workshop, Ambassador Miller opened his residence to the participating artists and the public, to see the art works of the three American artists as well as some by Batswana artists.

The ‘Art in Embassies’ event made a strong impression on all participants, inducing local artists to reflect upon their art – and the infinite possibilities of abstraction.