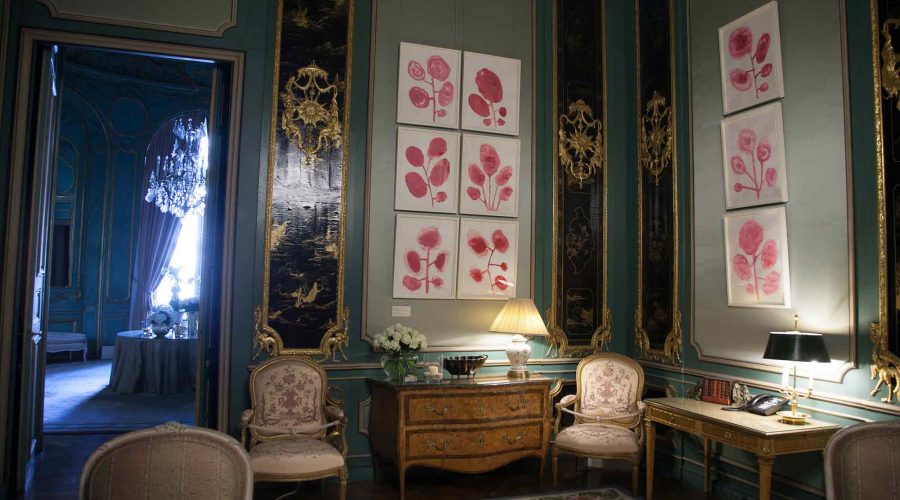 The New York Times - The Art of Welcome

“One day I’m going to wake up and say, ‘Where is the Calder?” – Jane D. Hartley, the United States ambassador to France,was joking about the monumental sculpture “Five Empties,” which is on loan from the Calder Foundation at her Paris residence.

Tucked away on one side of the Hôtel de Pontalba’s verdant garden, the steel standing mobile by Alexander Calder catches the visitor’s eye from the portico. Alexander S.C. Rower, Calder’s grandson, said that given the American artist’s time living and working in France, lending the sculpture to the United States Embassy in Paris was a “natural fit.”

“One day I’m going to wake up and say, ‘Where is the Calder?” – Jane D. Hartley, the United States ambassador to France, was joking about the monumental sculpture “Five Empties,” which is on loan from the Calder Foundation at her Paris residence.

Tucked away on one side of the Hôtel de Pontalba’s verdant garden, the steel standing mobile by Alexander Calder catches the visitor’s eye from the portico. Alexander S.C. Rower, Calder’s grandson, said that given the American artist’s time living and working in France, lending the sculpture to the United States Embassy in Paris was a “natural fit.”

Calder is just one of the superstar names in the lineup of works chosen for display during Ms. Hartley’s diplomatic tenure in Paris.

Ms. Hartley joined the diplomatic service in 2014, nominated by President Obama after a career that included executive posts in broadcast media, politics, government and consulting.

Taking the keys to the 19th-century mansion on the Rue Saint-Honoré came with the privilege of choosing art to complement her mission. The ambassador worked with Art in Embassies, a division of the United States State Department, to select modern and contemporary works that emphasize cultural ties through visual art.

“When people walk into this house, it’s America’s representation in Paris,” Ms. Hartley said during a recent stroll around the residence and the grounds. “This is America’s house in Paris.”

Ms. Hartley estimates that about 15,000 people will pass through the residence this year. On special occasions, trained docents guide tours of the temporary collection spread across the ground floor, garden and library upstairs, and Art in Embassies produced a catalog to accompany the exhibition.

From his regal portrait by René Princeteau over the stairs, George Washington eyes the entrance, where visitors encounter the contrast between the mansion’s ornate French grandeur and the stark minimalism of Josef Albers’ serene square paintings. Gerhard Richter’s mesmerizing “Strip (9291)” hangs in the salon, and a piece from Cy Twombly’s bold, colorful “Camino Real” series graces the ballroom.

“The modern art, both the color and the size, give this house a spirit and an emotion that really make a difference,” Ms. Hartley said. “The juxtaposition between the beautiful paneling and the art, in my view, is extremely American. That’s exactly what we’re talking about, this spirit that is America.”

During World War II, the Vichy regime confiscated the mansion and used it as an officers club for the German air force. After the United States government bought the building in 1948, it served as offices until a six-year renovation reconverted the house into living quarters for Ambassador Arthur K. Watson in 1972.

Virginia Shore, chief curator of Art in Embassies, said the division had worked with every United States ambassador to France since the 1960s. Pamela Harriman, who was appointed by President Bill Clinton in the 1990s, hung works from her own collection, including drawings by Winston Churchill, who was once her father-in-law. Art in Embassies oversaw loans of other works by artists such as Van Gogh and Cézanne, which had been donated to the National Gallery of Art by Ms. Harriman’s third husband, W. Averell Harriman.

The current collection focuses on European and American artists who had significant influence on 20th- century American art. Many of them also link France and the United States through work and residency.

The French artist Louise Bourgeois, famous for her colossal spider sculptures, lived in New York most of her life. Here her spiders are seen in a different context as part of a collection of infantile drawings called “The Fragile.” The exhibition also includes a bronze sculpture of a five-legged feline creature whimsically titled “Self Portrait,” and “Les Fleurs,” her uncharacteristically feminine paintings of flowers that appear as fuchsia shadows.

Ms. Shore, who has worked on more than 200 exhibitions over the past 24 years at Art in Embassies, said she wanted to include artists that were obvious fits, like Bourgeois, and others whose inclusion has been an “oversight” in the past, such as Sheila Hicks.

Ms. Hicks, an American artist who has been innovative in her use of textiles and weaving, has lived in Paris for more than 50 years. When Art in Embassies proposed a spot in the Paris residency’s entry hall, Ms. Hicks said she knew the perfect piece and personally delivered her criss-crossing fiber sculpture “Fasten Seatbelt.” The busy ball of fiber, she said, is a “friendly greeter” to put people at ease.

“Everyone is nervous when they come into the ambassador’s residence — you’re going to meet certain people, you want to make a good impression, you have to be on your best behavior,” Ms. Hicks said. “So, psychologically you get ready — you put on the seatbelt.”

Her work sits in proximity to that of Albers, who was her teacher at Yale.

The exhibition also has a secondary underlying theme: intergenerational female empowerment, and women rising to the top. With Bourgeois representing the vanguard of 20th-century modern art, Ms. Hicks and Louise Lawler — whose photograph triptych of Edgar Degas’s “The Little Dancer” hung in the ballroom until recently, when it was recalled for a retrospective at MoMA — were “obvious choices as pioneering artists of the next generation” in contemporary art, Ms. Shore said. “Together the work of these influential female artists underscores many of the current conversations about women today.”

Ms. Hartley said she and her husband had loved modern and contemporary art for many years, and that their “small collection” at home includes works by Frank Stella and Milton Avery. So she came to the project with a keen eye and her own ideas to add to the mix.

“Ambassador Hartley was very decisive,” Ms. Shore said. “She had a sense of the ambition of the program and our objective of promoting cultural diplomacy through the visuals arts.”

Ms. Hartley made specific requests for works by Mark Grotjahn and Willem de Kooning, and for a series of sublime photographs of the French National Library interior. She also asked the curators to work with the collector Donald Marron, a personal friend who loaned several works. For her private living quarters, the ambassador brought some of her own pieces, including works by Israel Lund and Sterling Ruby.

Now recalling “very, very long days” of hearings and Senate Committee on Foreign Relations meetings, Ms. Hartley said, “I would have 12 meetings a day and maybe one of those would be with Art in Embassies – and I so looked forward to that meeting!”

Presidential elections in November could bring a diplomatic reshuffle, and the ambassador noted that others would come after her. Leading a tour of the collection, Ms. Hartley paused in front of each piece and considered it with renewed admiration, as if seeing it for the first time, or the last.

“I will often stop in the morning when I’m going out and look at the art,” she said, “and think about how I’m going to miss it.”

View the whole story on the NY Times with images –

Correction: October 9, 2016
An earlier version of this article, using information from the State Department, referred incorrectly to tours of the artworks on display in the United States ambassador’s residence in Paris. The tours are conducted only on special occasions; they are not open to the general public.