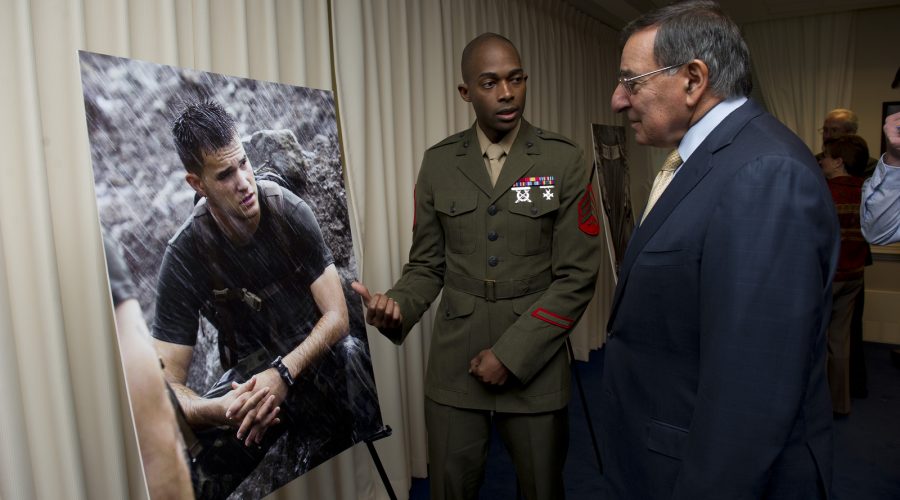 WASHINGTON, Nov. 30, 2012 – Defense Department leaders today honored 12 photography winners, selected from over 3,000 submissions, for their participation in the Arts in Embassies Program. Defense Secretary Leon E. Panetta, Army Gen. Martin E. Dempsey, chairman of the Joint Chiefs of Staff, and Pentagon Press Secretary George E. Little recognized 12 “best in show” winners for the “Serving Abroad … Through Their Eyes” category of the program. At a Pentagon ceremony where the exhibit is on display, the chairman quoted Aristotle in describing the purpose of art. “The importance of art is not to reveal the outward appearance of things, but the inward significance of things,” Dempsey said. “This was really an easy [program] to get behind. It really was exciting.” The Arts in Embassy program started during the Kennedy administration. “It is a true honor for all of us to be a part of the 50th anniversary,” Little said, noting the defense secretary intently studied each image and read its accompanying caption. The 12 winners were selected from 161 finalists by a panel of distinguished judges from a pool of 3,267 photos submitted by troops and members of the foreign and civil service. Of the 12 photos selected, eight were taken by service members, including five who are graduates of the Defense Information School, at Fort Meade, Md. Little, who described the Arts in Embassies program as a “unique initiative,” noted as the Pentagon press secretary he “attaches a lot of eloquence to spoken words.” “[But] no words can capture the elegance of these images,” he said. “The elite panel of judges [who selected these] included three former chairmen, two former secretaries of state and an NBC News [correspondent].” The 12 best in show finalists received a plaque engraved with the signatures of Panetta and Secretary of State Hillary Rodham Clinton as well as their respective award-winning photo.