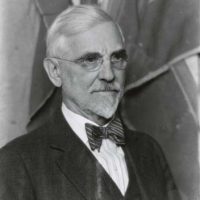 Joseph Henry Sharp is widely considered to have been the “Spiritual Father” of the Taos Society of Artists. He was the first painter to visit New Mexico, before Phillips and Blumenschein made their historic wagon trip. He left behind a vast cultural record of Native American life, landscapes, and portraiture. His work is often referred to as poetic, and is steeped in deep nostalgia that he felt all his life for the vanishing culture of the American Indian and the old west.

Sharp was born in Bridgeport, Ohio to Irish parents. His father was a local merchant. From his earliest days, Sharp was fascinated by anything he could learn about the American Indians. This interest did not extend, apparently, to anything taught in school. The young Joseph Henry was more interested in drawing, fishing and swimming, the latter of which almost killed him – he nearly drowned once in an incident in a river. Sharp was pulled out of the water by friends who thought he had died. However, after being carried home he was resuscitated by a determined mother. Unfortunately, Sharp would never completely recover from his accident. His hearing was damaged and would continue to deteriorate rapidly, eventually leaving him utterly deaf. At this early age, Sharp’s indomitable spirit was already manifest, as he never for a moment let his handicap hold him back. He learned to read lips and began to carry a pad and pencil with him wherever he went, never once losing his optimistic outlook on life. It was around this time that he began to realize that he had a natural facility for drawing, and he sketched often in the outdoors.

When Sharp was 12, his father died, and went to work in a nail mill and copper shop, giving his earnings to his mother. Two years later, he moved to Cincinnati, where he lived with his aunt. At 14, he worked and supported himself entirely, still sent money to his mother, and managed to have enough to enroll in art classes at Mickmicken University in Cincinnati. In the late 19th century, studying in Europe was still considered compulsory for any aspiring artist, and after 8 years of working, and studying when he could, Sharp had saved enough extra money to travel to Europe, and spent two years at the Antwerp Academy studying in the realist tradition; history painting and portraiture.

Sharp’s first trip to the West was in 1883 at age 24. He visited pueblos in New Mexico, Santa Fe, Albuquerque, Tucson, and then took a boat up the West Coast and disembarked in the Washington Territory. In the northwest he encountered natives from numerous tribes, and the sketches he did on that trip would be the basis for his first Native American portraits. His love of the West notwithstanding, Sharp seemed to feel that his studies were never really over, and he again set off to Europe. He went to Germany, Italy, but spent most of his time in Spain, studying the Spanish masters El Greco, Velazquez, and Goya.

Back in Cincinnati, Sharp visited Taos for the first time in 1893, on a commission from Harper’s Weekly. He was captivated by the then unspoilt life of the natives in Taos. The pictures he completed for the commission were very well received, and led to further illustration work with numerous publications. In spite of this success, Sharp still felt that his education was incomplete, and he went to Paris for two years of further study.

After his return to the U.S., Sharp taught in Cincinnati, worked as an illustrator, and spent time in Montana, camping on the battlefield of Little Big Horn, becoming acquainted with and painting portraits of Plains Indians. In 1900, an exhibition of these portraits would travel to Paris and to Washington D.C., and would prove to be a turning point in his career. The Smithsonian Institution purchased 11 portraits, and President Roosevelt took an interest in Sharp’s work. Roosevelt had the Indian Commission build and furnish a cabin and studio for Sharp. Sharp had it constructed at Little Big Horn, at the intersection of two rivers. Two years later, Phoebe Apperson Hearst (mother of William Randolph Hearst), bought 80 paintings from Sharp all at once. Suddenly Sharp was financially independent, and could quit teaching and illustrating to devote himself to painting full-time.

While working in Montana, Sharp began amassing a huge personal collection of Native American artifacts and costume. It was important to him that these things be preserved and understood, and that he was closely connected to and had a thorough understanding of his subject matter. He even made sure that he got to know all of his portrait subjects personally. In this way he was as much an anthropologist as a painter.

Once he was independent and could paint freely, Sharp’s output was enormous. He had been a hard worked ever since he had to support himself at 14, and this attribute never left him. He sometimes completed hundreds of paintings in a year. The Northern Plains Indians remained the focus of these efforts for a long time. Sharp felt that his attention belonged there, rather than the pueblos, because he saw the Plains Indians and their way of life dwindling much faster. He knew that Taos would still be there in 10 years.

He began to spend some summers in New Mexico, and in 1909 purchased an old Penitente chapel to use as a studio. The Penitente sect was one that believed in self-flagellation (whipping oneself) as a means of atonement, and apparently the chapel still had bloodstains on the rafters when Sharp moved in. In 1912 Sharp finally relocated to Taos permanently, and was a charter member of the Taos Society of Artists, formed that same year. 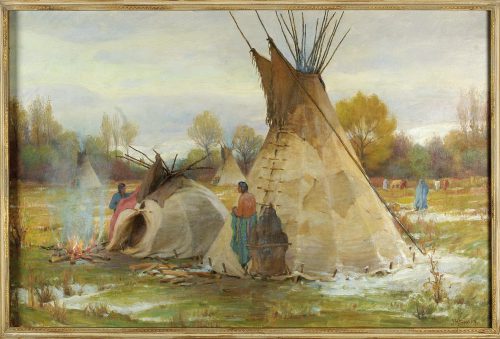 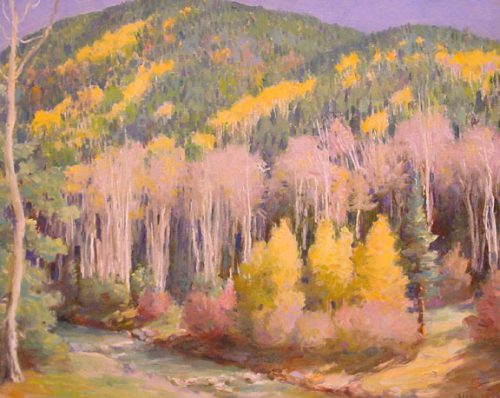 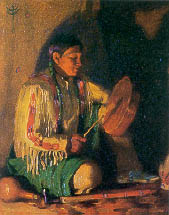 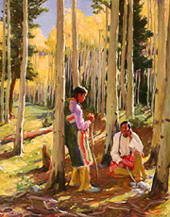 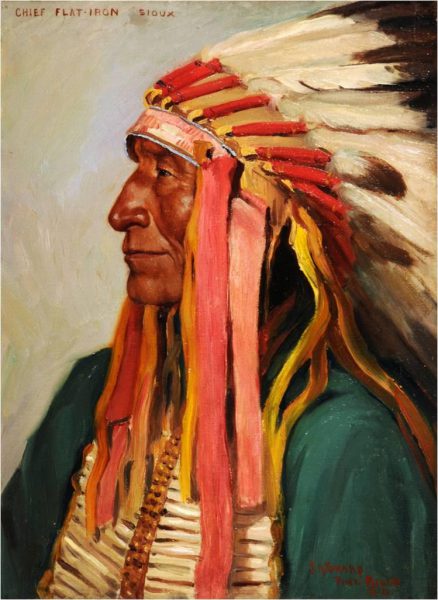