The honor of an Art in Embassy commission took me to Dakar, the capital of Senegal in West Africa, in December 2012.

The honor of an Art in Embassy commission took me to Dakar, the capital of Senegal in West Africa, in December 2012. My intention for the week was to absorb every sensory experience possible that could be filtered into the 10 pieces I was to produce, reflecting these people and their world.

Among the many sources of inspiration was a factory where women were weaving and hooking rugs with hand dyed yarns, the unusual, majestic Baobab trees which stood like army’s of giants in the otherwise wide open countryside, a sobering trip to Goree Island off the Dakar coast where slaves were traded in the late1700’s. This was a most beautiful small island with the old rusted armaments scattered among the colorful homes of its few residents, giving a sense of the history that had occurred there. Here I encountered 2 men making sand paintings of local scenes. They graciously traded me 12 small bags of their native colored sands for a bag of Ghiradelli chocolate squares I’d brought as gifts. An amazing series of trips to different street markets revealed a lifestyle sustained by buying, selling and trading. This was a visual overload further stimulated by the hustle-bustle pace needed to survive it all. It was alive with color, scents and fabulous music. Mounds of beads, steaming meats, perfectly folded fabrics in every color and pattern were remarkable. Walls of shoes and racks of clothing, much bought cheaply from the US in bales, now to be worn by the Senegalese. Stacks of folded straw mats towering high on top of merchant’s heads remained balanced as they perilously rode bicycles through the narrow aisles. The banter of deal making was constant. A striking element to the mix were the yellow buses everywhere, painted with scenes of life, carrying so many people that they were hanging off the sides and back as they darted in and out of the cars. This was an immediate reminder of the difference our focus on safety plays here in American society. I found the people to be quite beautiful, curvaceous and statuesque, with chiseled faces reflecting a pride. My interactions found them to be open and warm. All of these encounters were enhanced by my Senegalese Embassy guides who provided constant explanations and language translation from the French and Wolof that was spoken there.

This cultural exchange has provided an abundance of material for new growth and perspective in my work and life. The opportunity to observe the diverse creativity in the Senegalese culture has opened and enriched me. It was a privilege to visit the new Embassy building, seeing where the political exchanges take place, and consider the art that will live there created by those of us who have visited, researched, and collaborated with the Senegalese people. It has been a gift. 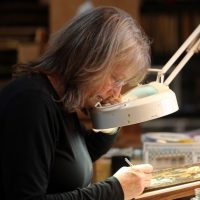