"In May of 2016 I was lucky to find myself in Paramaribo, Suriname, following an invitation by the U.S. State Department, to come - see - meet – learn and explore. The sheer vastness of the Suriname Rain Forest with its thousands of tree and plant species including important medicinal herbs and plants, 674 species of birds, 130 species of reptiles, and 200 species of mammals, has the greatest percentage of remaining forest cover than any country in this hemisphere, contributing to a unique, indigenous and multi-cultural amalgamation of peoples and religions. These discoveries informed and became the inspiration for my series of Rain Paintings captured with Surinamese rain..."

Artist Sibylle Szaggars Redford traveled to Suriname for her commission for the new permanent collection of the U.S. Embassy in Paramaribo, Suriname. Born and raised in Europe, Szaggars Redford moved to the U.S. permanently in the 1990s, where she set up her artistic practice in Sundance, Utah. An interest in the traditions of Native American cultures and her developing concerns about the environment have inspired the artist throughout her career. In 2010, Szaggars Redford started to experiment with elements of rain and watercolor and created her first rain video. She continued to develop her work along with mixed media installations and started collaborating with musicians, performers, and composers. Suriname, with its vast rain forest and diverse group of indigenous and tribal peoples, offered Szaggars Redford and her collaborators—Gregory Leon Baird and Karsten Staiger—a wide range of impressions. Their experiences resulted in a series of watercolors, created in Suriname, that became the inspiration for her five Rain Paintings that will be installed in the U.S. Embassy in Paramaribo.

Szaggars Redford arrived in Suriname during the rainy season and brought with her a folder of her uniquely prepared watercolors on paper that interact directly when “kissed by the rain”. The artist’s first event took place on Wednesday, May 4th, when she traveled to the indigenous village of Powakka and met with the village captain Betty Sabajo and her brother, the artist Leo Sabajo, as well as with representatives and artisans from the Powakka women’s organization. That same evening, Szaggars Redford was the guest of honor for a reception at the opening of the Art in Embassies exhibition at the Residence of Ambassador and Mrs. Noland, where she had a chance to meet with Surinamese artists and art professionals.

On Thursday morning, after a site visit to the new U.S. Embassy, Szaggars Redford met with the President of the Association of Indigenous Villages, Marie-Josée Artist, for an in-depth conversation about the different indigenous cultures in Suriname. After lunch, the artist and her team were received by indigenous artist Winston van der Bok. Van der Bok, who supports himself as a graphic designer in addition to creating artwork, explained some of the symbols and elements in his culture and artwork. Three of his works are now on permanent display at the U.S. Embassy. That same evening, Readytex Gallery hosted a talk and video presentation by the artist about her “The Way of the Rain” art performance pieces and organization. The newly renovated space was packed with a very interested and enthusiastic audience who had the opportunity to follow up on the presentation during a question and answer session. Prior to the presentation, Szaggars Redford created another rain painting on the sidewalk outside the gallery.

On Friday, May 6th, the day started with a long trip to the village of Matta where the artist and the U.S. Embassy team were received by village captain Michel Karwofodi. He had invited some of the elders of the village to join the conversation and presented some of the village’s cultural artifacts as well as describing some of their traditions. Mid-morning during class recess, a large group of school children came out to join Baird, Staiger, and Szaggars Redford. On the way back to Paramaribo, as it started raining, Szaggars Redford stopped alongside the road to create some additional paintings.

On the last day of the exchange, Szaggars Redford visited the village of Redi Doti, a few hours outside of the capital of Paramaribo, where the group met with the village captain Lesley Artist. In addition to meeting with the different artisans in the village, Szaggars Redford received a guided tour of the savanna forest that ended with a visit to the Cassipora cemetery, the oldest ruins of the Jewish settlement in Suriname, dating back 350 years.

Upon returning to Paramaribo, Szaggars Redford and her collaborators were welcomed by heavy rain showers. Instead of celebrating the end of an exciting, fascinating and fulfilling week with drinks and dinner, Szaggars Redford immediately brought out the balance of her prepared rain paintings and began collaborating with the rain. “. . . how can I leave now?” 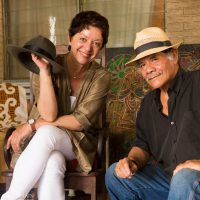