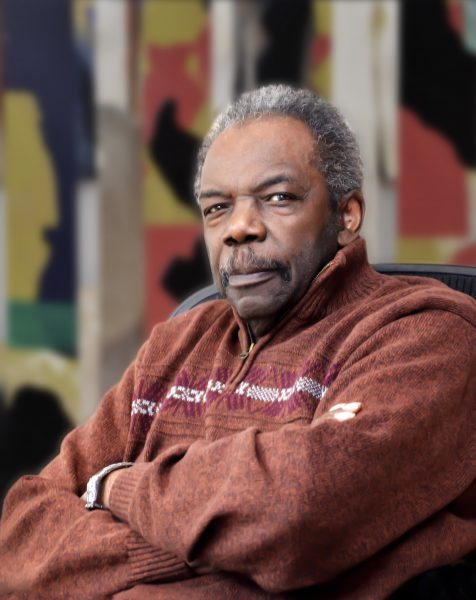 Sam Gilliam was awarded the Medal of Art for his longtime contributions to Art in Embassies and cultural diplomacy on January 21, 2015.

Sam Gilliam was born in Tupelo, Mississippi and was the seventh of eight children to Sam and Estery Gilliam. In 1951, Gilliam graduated from Central High School in Louisville. Gilliam served in the United States Army from 1956 to 1958. He received his Bachelor and Masters degree of Fine Arts at the University of Louisville. In 1955, Gilliam had his first solo exhibition at the University of Louisville. He initially taught art for a year in the Louisville public schools. In 1962 Gilliam moved to Washington, D.C., where he has lived ever since. In the 1960s, as the political and social front of America began to explode in all directions, the black artist began to take bold declarative initiatives, making definitive imagery, inspired by the specific conditions of the African American experience. Abstraction remained a critical issue for artists like Sam Gilliam. Gilliam’s sense of color is modulated by his study of light, color, and its transformative and changing dynamics. He is most widely known for the large color-stained canvases he draped and suspended from the walls and ceilings during the late 1960s and early 1970s. “The background for Gilliam’s art was the 1950s, which witnessed the emergence of abstract expressionism and the New York School followed by Color Field painting.” Gilliam’s early style developed from brooding figural abstractions into large paintings of flatly applied color pushed Gilliam to eventually remove the easel aspect of painting by eliminating the stretcher. Gilliam was influenced by German Expressionists such as Emil Nolde, Paul Klee and the American Bay Area Figurative School artist Nathan Oliveira. He states that he found lots of clues on how to go about his work from Tatlin, Frank Stella, Hans Hofmann, Georges Braque, Pablo Picasso, and Paul Cézanne. In 1963, Thomas Downing, an artist who identified himself with the Washington Color School, introduced Gilliam to this new school of thought. Around 1965 Gilliam became the first painter to introduce the idea of the unsupported canvas. His drape paintings were suspended from ceilings, arranged on walls or floors, and they represent a sculptural, third dimension in painting. Gilliam states that his paintings are based on the fact that the framework of the painting is in real space. Gilliam’s draped canvases change in each environment they are arranged in and frequently he embellishes the works with metal, rocks, and wooden beams. In 1975, Gilliam veered away from the draped canvases and became influenced by jazz musicians such as Miles Davis and John Coltrane. He started producing dynamic geometric collages, which he called “Black Paintings” due to the hue. Again, in the 1980s Gilliam’s style changed dramatically to pieced/collaged paintings reminiscent of African patchwork. Gilliam’s ability to move beyond the draped canvas, coupled with his ability to adopt new series keeps the viewers interested and engaged. This has assured his prominence in the art world as an exciting and innovative contemporary painter.