Victor Higgins was born William Victor Higgins in Shelbyville, Indiana. His inspiration to paint came from an itinerant sign painter. Higgins studied briefly at the Art Institute of Chicago and the Chicago Academy of Fine Arts before traveling to Europe to continue his studies first at the Académie de la Grand Chaumiere in Paris and then in Munich. After returning to Chicago Higgins went on a painting trip to Taos, New Mexico. The colorful life that he and his contemporaries found in New Mexico led to the formation of the Taos Society of Artists founded in 1915. Higgins a member of the group and became a permanent resident of Taos, New Mexico. He primarily concentrated on painting the landscape but also had an established reputation for his striking portrayals of the Native Americans living in Taos.

Higgins was greatly influenced by the 1913 New York Armory show and the landscapes of Paul Cézanne. He began to incorporate geometric patterns into his work, exploring such devices as overlapping intertwined planes and varying perspectives of Cubism. Higgins went through numerous phases of modernism which resulted in several striking compositions. Mountains and Valleys exemplifies Higgins’ experimentation with modernism in its geometric shapes enhanced by strong contrasts of light and dark, which exhibit Cézanne’s influence and the interlocking planes of Cubism. 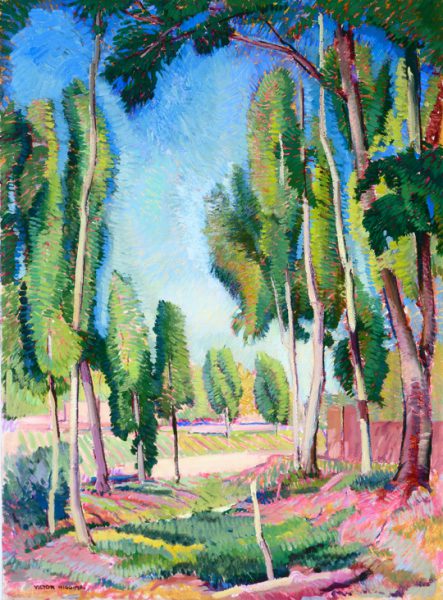