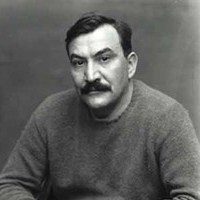 Theodoro Stamos was born in Manhattan, New York to Greek immigrant parents. He studied sculpture for three years at the American Artist’s School and in 1939, he turned to painting, a medium in which was basically self-taught. As a first-generation Abstract Expressionist, his signature work, done later in his career, is distinctive for its large expanses of dissolved light. Two works, Saga of Alphabets, 1948 and Shibboleth, 1949 included in the Art in Embassies collection come from his early biomorphic period from 1945-49. Stamos often studied nature frequently visiting the Museum of Natural History in New York, to view fossils, minerals and animal skeletons or sketched directly outdoors. Through these observations and reading of pre-Columbian and American indigenous myth and rituals his forms expressed the organic and inorganic “forces of nature”. In Emperor sees the Mountain, 1951, Stamos began a series of paintings influenced by Asian philosophy and Japanese calligraphy. In an undated essay by Stamos “Why Nature in Art”, he focuses on how the Asian artist related to nature, “the eastern artist tried to become the object itself”. In 1950, he was the youngest artist to be included in the famous “irascibles” photograph of leading Abstract Expressionists. In later years Theodoro Stamos lived between New York and the Greek Island of Lefkada. 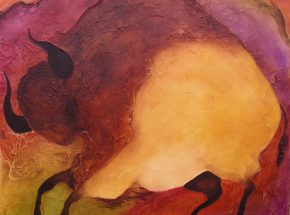