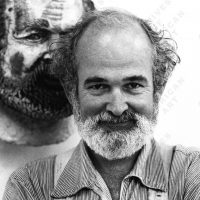 Robert Carston Arneson (September 4, 1930 – November 2, 1992) was an American sculptor and professor of ceramics in the Art department at UC Davis for four decades.

Arneson was born in Benicia, California, then a small blue-collar town. He graduated from Benicia High School and spent much of his early life as a cartoonist for a local paper. Arneson studied art education in Oakland, California and went on to receive an MFA in 1958.

Starting in the 1960s, Arneson and several other California artists began to abandon the traditional manufacture of functional items in favor of using everyday objects to make confrontational statements. The new movement was dubbed ” Funk Art,” and Arneson is considered the “father of the ceramic Funk movement.”
Arneson used common objects in his work, which included both ceramic sculptures and drawings. He appeared in many of his own pieces – as a chef, a man picking his nose, a jean-jacketed hipster in sunglasses.

Even his Eggheads bear a self-resemblance. Among the last works Arneson completed before his death, the last of the Eggheads were installed on campus at UC Davis in 1994. The controversial pieces continue to serve as a source of interest and discussion on the campus, even inspiring a campus blog by the same name.

One of Arneson’s most famous and controversial works is a bust of George Moscone, the mayor of San Francisco who was assassinated in 1978. Inscribed on the pedestal of the bust are words representing events in Moscone’s life, including his assassination: the words “Bang Bang Bang Bang” and “Harvey Milk Too!” are visible in on the front of the pedestal.

Arneson’s teaching career began soon after receiving his MFA degree, with a stint at Santa Rosa Junior College, in Santa Rosa, CA (1958-59). This was followed by a position at Fremont High School (1959-60) in Oakland, CA, before advancing to teach design and crafts at Mills College, also located in Oakland (1960-62).
Arneson’s next appointment (in 1962) was at UC Davis, where his gifts were recognized by Richard L. Nelson, who had founded the Art Department. It was during this period of the early 60s that Nelson was assembling a faculty that would come to be celebrated as one of the most prestigious in the nation. In addition to Arneson, Nelson had also selected Manuel Neri, Wayne Thiebaud and William T. Wiley, each of whom would go on to achieve international recognition.

Initially hired to teach design classes (in the College of Agriculture), it was Arneson who established the ceramic sculpture program for the Art Department. It was in many ways a bold and radical move, in that ceramics were not yet recognized as a medium appropriate for fine art at that time.

Since its founding, the campus ceramics studio has been housed in a corrugated metal building known as TB-9, and it was here that Arneson held court for nearly three decades until his retirement in the summer of 1991. Although he had been ill for some time, Arneson worked under difficult circumstances in order to conclude his academic career in an orderly manner.

Arneson’s fame is far-reaching, and his works can be found in public and private collections around the world, including the Chicago Art Institute, The Contemporary Museum, Honolulu, the Hirshhorn Museum and Sculpture Garden (Washington, D.C.), the Metropolitan Museum of Art (New York City), the Museum of Contemporary Art (Kyoto, Japan), the San Francisco Museum of Modern Art, the Smithsonian American Art Museum, the Whitney Museum of American Art (New York City) and the U.S. Embassy in Yeravan, Armenia. His creations are also at the Lowe Art Museum in Coral Gables, Florida.

The Nelson Gallery at UC Davis, where Arneson was a faculty member, owns 70 of the artist’s works, including The Palace at 9 a.m., which is currently on display in the gallery. The 70-square-foot (6.5 m2) earthenware sculpture, a depiction of his former Davis residence, is considered among his most famous sculptures. Several of his etchings and lithographs also are on display in the library.
Arneson died on November 2, 1992, after a long battle with cancer. 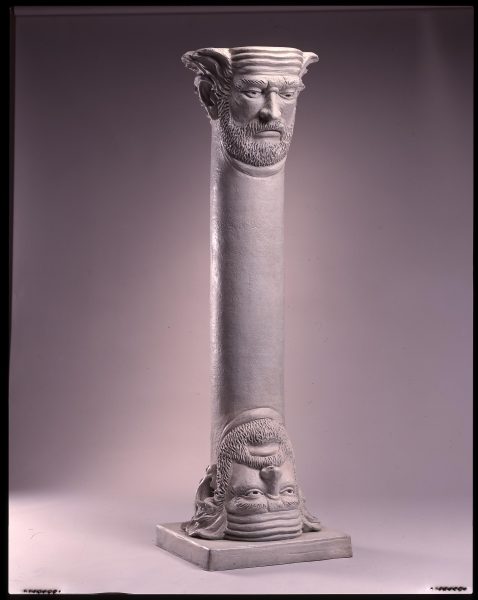 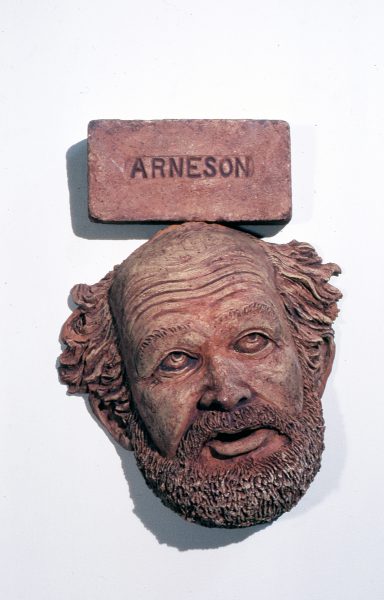