Born in Sanger, California, Manuel Neri began exploring new forms and materials in sculpture and painting in the early 1950s while studying in San Francisco. It was during this period that such prominent Bay Area artists as David Park, Elmer Bischoff, and Richard Diebenkorn began to take a renewed interest in the human figure. Their efforts to combine the human form with abstract expressionist practice had a lasting influence on Neri.

Initially, Neri began sculpting in “junk”-burlap, wire, cardboard-and, soon thereafter, in simple plaster. His lone female figures, often in frankly erotic or naturalistic poses, were lauded immediately not only for their vitality and rawness but also for being simultaneously contemporary and timeless. From the onset, Neri painted the “skin” of his figures with patches of bright color-a conscious bow, he has said, to the painted sculpture of Marino Marini and to the ceramics of Pablo Picasso, as well as to the visceral expressionism of Willem de Kooning…Neri also creastes figures and abstractions on canvas and on paper…Over the past twenty years, he has sculpted in Carrara marble even as he continues working in bronze. 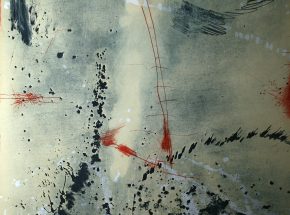