Lynn McCarty was born in Phoenix, Arizona. She received a Bachelor of Fine Arts in 1983 from Columbus College of Art and Design and a MFA from Pratt Institute in Brooklyn. Solo exhibitions of McCarty’s paintings have been organized at the Columbus College of Art and Design (1983); the Pratt Institute (1985); and galleries in New York, Brooklyn, and Zurich.

Her painting were included in “La Belle et la Bete,” at the Musee d’Art Moderne de la Ville de Paris (1995); Conversation Project at A.R.T. (1998) and “The Art of Collecting” at teh Flint Institute of Arts (2003). She was a Ford Foundation Scholarship recipient in 1982 and a Pollock-Krasner Grant recipient in 1994. McCarty’s paintings are in the Vatican Collection, Art in Embassies Program and the Memphis College of Art. 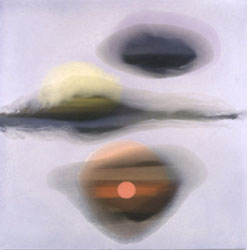