Born in Newcastle, Staffordshire, England, Lewis Meakin settled in Cincinnati, Ohio. He became a skilled painter of landscapes, especially of scenes along the Ohio River and the Canadian Rockies, and he also painted during the summers at Cape Ann and Gloucester, Massachusetts.

Fellow artist George Bellows called him “one of the best landscape painters in America” according to the “South Bend Tribune,” 7/2/1989. According to Peter Falk in “Who Was Who in American Art,” Meakin is regarded as an important Midwest landscape painter, often called the ‘Father of Western Art’ who began working in a tonalist manner, then moved toward Impressionism around the turn of the century.”

Meakin’s family were pottery makers and emigrated to Canada in 1860 and to Cincinnati in 1863 when Lewis was a child. He studied at the School of Design in Cincinnati with prominent Cincinnati artists Frank Duveneck and John Twachtmann, and later attended various schools in German, France, Holland, and Italy.

Because he was a shy, reticent person, he did not receive a lot of overt attention for his painting. However, in 1987, the Cincinnati Museum, where he had been Curator of Painting, held a retrospective, the first formal exhibit of his painting in 70 years.

Source:
“South Bend Tribune”, 7/2/1989 (Indiana)
Peter Falk, “Who Was Who in American Art”
Peggy and Harold Samuels, “The Illustrated Encyclopedia of Artists of the American West” 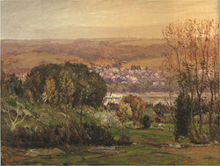