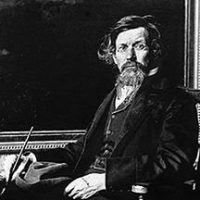 Born in Newburgh, New York, in 1825, George Inness was raised in New York City and Newark, New Jersey. His early life was disrupted by severe illness, and as a result, he had little formal academic or artistic education. In Newark, he studied with the itinerant painter John Jesse Barker, and in New York City, probably in 1843, with the French-born landscape painter Régis François Gignoux. Inness traveled to Italy in 1850. In 1853 he visited France, where he studied French Barbizon landscape painting, admiring especially the work of the most radical of the Barbizon artists, Théodore Rousseau. This was the most decisive influence on
Inness’ style, which employed chiaroscuro and atmospheric effects to interpret the quiet mood of his rustic landscapes. In the early 1860s, Inness moved from New York City to Medfield, Massachusetts, and in 1864, he relocated to Eagleswood, New Jersey. At Eagleswood he was introduced to the teachings of Emanuel Swedenborg. It became his religious faith, and determined, too, the increasingly allusive, expressive, and almost mystical character of his later art. Inness lived in Italy from 1870 to 1874 and in France briefly in 1875, when he returned to America. In 1876 he settled in Montclair, New Jersey. He lived in Montclair for the rest of his life, but traveled widely, often for the sake of his health, to Niagara Falls, New York; Virginia; California; and Tarpon Springs, Florida. He died on a trip to Scotland in 1894. 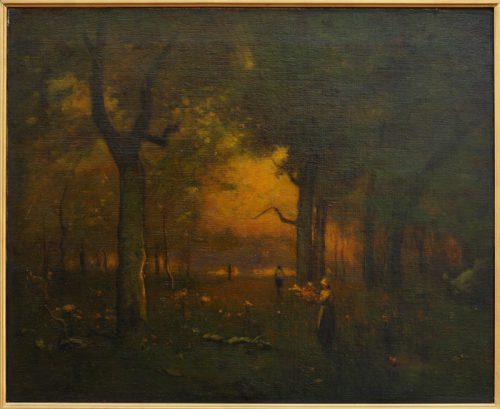 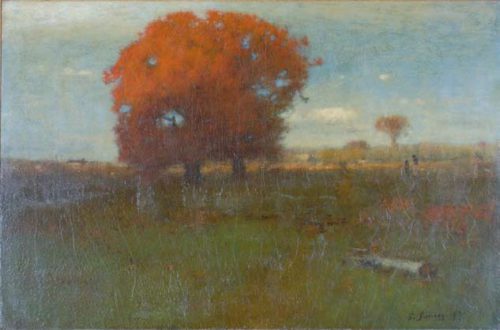