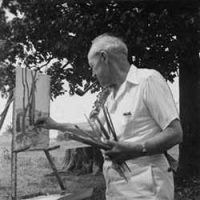 George Gustav Adomeit is considered a major American painter and printmaker of the first half of the twentieth century, George Adomeit moved to Cleveland from Germany at the age of four. For much of his life he worked as a commercial printer and lithographer. He co-founded one of America’s largest printing establishments, the Caxton Company, and for many years served as its president. Yet these duties did not prohibit him from also pursuing a career in the arts. George Adomeit first studied at the Art Club of Cleveland, with Frederick Gottwald, Max Bohm and Ora Coltman, and later at the Cleveland School of Art, from which he graduated in 1911.

George Adomeit’s first one man exhibition was held at the Taylor Gallery in 1912. During the following years his paintings and drawings were regularly exhibited at the Cleveland Museum of Art (1919-1959), the Toledo Museum of Art (1928-1935), the Pennsylvania Academy of Fine Arts (1925-1941), the Corcoran Gallery of Art (1928-1937). as well as at major public museums in Detroit, Chicago, St. Louis, Pittsburgh, Los Angeles and New York. George Adomeit was a founding member of the Cleveland Society of Artists, and a member of the Cleveland Print Club and the American Graphic Association.