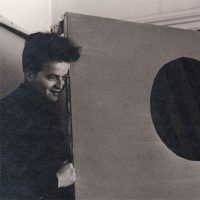 In the 1960’s, Edward Avedisian was one of the youngest of those luminaries producing a grand new abstract painting. Shown first at Ivan Karp and Dick Bellamy’s Hansa Gallery and then at Robert Elkon, Avedisian’s insouciant mix of pop playfulness, color field cool and high formalist style put his art in a unique, and at the time generously rewarded, position. Paintings made it onto the cover of Artforum, were purchased by all the major museums, were among the few abstract works shown as representative of America’s post-war achievement at Expo 67 in Montreal and comprised a cornerstone in histories of the period written by Barbara Rose, among others.

Yet, Avedisian left New York in the mid-1970’s, moving upstate along the Hudson River, severing his exhibition ties. Had Avedisian merely left New York City to establish his studio in a quieter place once his position was secure, had he continued to develop the abstraction for which he became known, then this would be just another permutation of the life lived by many successful artists of his generation. But, as these new paintings indicate, Avedisian’s break was far more deeply expressed.

Over the past twenty years Avedisian has developed a new style: figurative, ostensibly naive, contentious. The world Avedisian paints is that of his upstate environs and he does so with a disarming directness. At the core of his new paintings lay a furtive sense of narrative: tow pick-ups are parked beside a farmhouse, a couple repose behind roadside billboards, men work on their trucks. Avedisian, always contemporary, has evolved into a different kind of American painter. After becoming a cosmopolitan maestro in the sophisticated symphony of sixties abstract painting, Avedisian has become provincial in the most explicit sense. It will be an interesting reconciliation between Avedisian’s early achievement and his mature work. This mature work is, in many ways, a challenge.