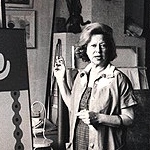 Doris Emrick Lee was an American folk artist who was known for her figurative painting and printmaking. She won the Logan Medal of the arts from the Chicago Art Institute in 1935.

She attended Ferry Hall in Lake Forest, Illinois from 1920-22. She graduated from Rockford College in 1927 and in 1929 with the American Impressionist Ernest Lawson at the Kansas City Art Institute, and in 1930 she attended the California School of Fine Arts in San Francisco.

Her career took off in 1935, when her painting “Thanksgiving Dinner” won the Logan Prize in the annual show at the Art Institute of Chicago. As a Works Progress Administration artist during the 1930s, she was commissioned to create several murals by the Treasury Department in Washington, DC. In 1937 Lee painted two murals in the Main Post Office in Washington, DC and another in the Summerville, Georgia Post Office. That same year, the Metropolitan Museum of Art acquired her painting Catastrophe 1936, for its permanent collection. During the 1930’s and 1940’s she also created a number of lithographs for the Associated American Artists.

She taught at Michigan State University and Colorado Springs Fine Art Center and she also worked as a magazine and book illustrator. She was married to the artist Arnold Blanch in 1939 and for many years she lived and worked in Woodstock, NY and for a while she maintained a studio in New York City. 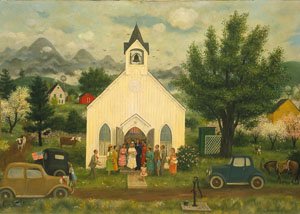