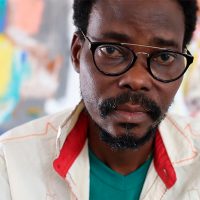 Dominique Zinkpè was born in 1969 in Cotonou in the Republic of Benin. He has participated in numerous exhibitions workshops and residences in Africa, Europe and South America. Zinkpè gained early recognition through the Prix Jeune Talent Africain awarded to him at the Grapholie in Abidjan in 1993. In 2002 he won the Prix Umeoa at the 2002 Dakar Biennale.

Zinkpe’s oeuvre is complex and wide ranging, spanning installations, drawings, painting, sculpture and video. There is a restlessness within Zinkpe that prevents him from confining his creative processes to one medium, but his paintings and drawings represent his most intimate work – significantly theyare produced at the private studio in his house as opposed to his hectic sculpture and installation studio in the centre of Cotonou.

The paintings and drawings follow tortuous journeys where figures hover midway between human and animal, recalling power games, masquerades, etc., all with a strong satirical flavour. The works play out the mystical, philosophical, and cultural conundrums thrown up by the merging of Catholicism and Animism and traditional and contemporary culture. His distinctive brilliance reveals itself on the canvas; intimate, powerful and coquettish. The works are disturbing and arresting constructs of the imagination mirroring the dilemmas and complexities of Zinkpe’s own life. 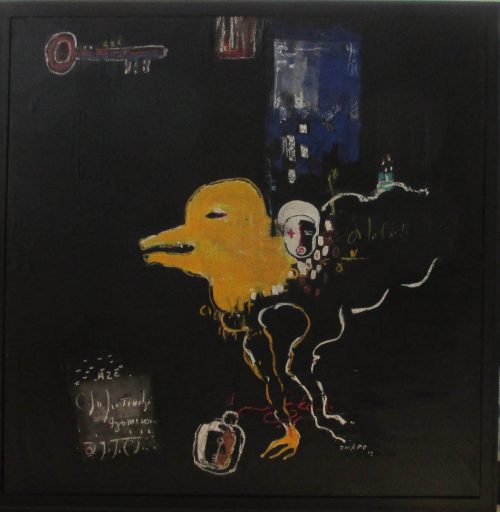