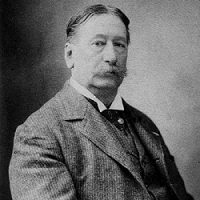 Daniel Ridgeway Knight, born in 1839, studied first at the Pennsylvania Academy of Fine Art and then saved his money for eight years in order to finance an education at L’ecole Des Beaux Arts in Paris from 1881-83. Knight was an expatriate plein-air painter and spent most of his career living in France. His paintings often depicted an idealized young peasant woman in crisp academic style and minute detail of skin and gesture. These women were usually placed in a sunlit landscape. His painting “Hailing the Ferry” (1888) won him praise and awards in the U.S. and France and was soon issued as a lithograph, becoming one of the most copied 19th century paintings. The design was even used in fabric decoration. During WWI, Knight worked for the French as a pictorial propagandist. He died in 1924.