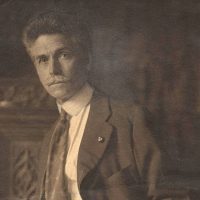 Born in Amesbury, Massachusetts, Charles Harold Davis attended art classes at the newly founded school of the Boston Museum of Fine Arts, Massachusetts, where he studied under the German artist Otto Grundmann from 1877 to 1879. He went to Paris in 1880, remaining in France for ten years. He studied at the Académie Julian under Jules-Joseph Lefebvre and Gustave Boulanger from 1880 to 1992, and spent much time in Fleury and Barbizon and painting in the forest of Fontainebleu. So enthralled by the region, in fact, that he decided to become a landscape painter and returned there to work foregoing his studies at the academy. he painted a large landscape for submission to the Paris Salon of 1882, and to his amazement it was accepted. Thereafter, he regularly exhibted at the Salon, receiving critical acclaim. It was also in Fleury that he met Angele Genevieve Legarde, a French woman whom he married in 1884. The couple had two children.

In 1891, Davis family returned to New England, settling in the seaside village of Mystic, Connecticut, centrally located between New York and Boston, the two cities in which he actively exhibited. He developed an increasingly impressionist style and began painting cloudscapes, for which he was best-known. He eventually became a leading figure in the Mystic Art Colony and founded the Mystic Art Association in 1913. He became a full member of the National Academy of Design in 1906, and received many awards, including a silver medal at the Paris Exhibition of 1889.

Davis’s work is included in important collections, including those of the Metropolitan Museum of Art, New York City; the Corcoran Gallery of Art, Washington, D.C.; The Pennsylvania Academy of Art, Philadelphia; and the Museum of Fine Arts, Boston. 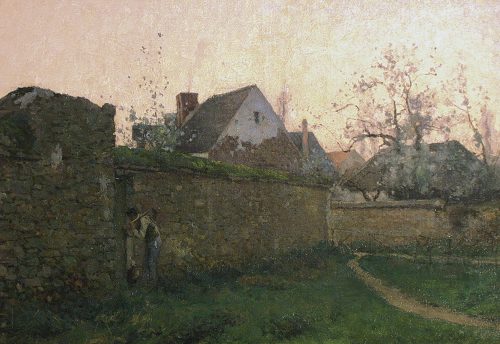