Alice Barber was born on a farm near Salem, NJ, where she attended local schools. The family moved to Philadelphia, and by 1873 she was a full time student at the Philadelphia School of Design for Women (now Moore College of Art). There she became proficient at engraving, an important skill in the days before photo-mechanical reproduction. In 1876 she enrolled at the Pennsylvania Academy of the Fine Arts, where she studied under Thomas Eakins. Among her classmates was Emily Sartain.

Financial considerations finally forced her to turn to full-time engraving, but by 1885, the long hours and close work affected her health. She turned to pen and ink drawing and was soon supporting herself by illustration in that medium. During a trip to Europe she took up painting in oils. When she returned, she supported herself with pen and ink illustration and painted for relaxation.

In 1890 she married another fellow Academy student, Charles Hallowell Stephens, by this time a teacher at the Academy. She continued to work as an illustrator, now in color and with a softer effect produced by paint instead of pen and ink. Her talents were equally effective in the domestic genre stories then popular in magazines, and with more dramatic illustrations for works by Conan Doyle.

With Emily Sartain, Alice Barber Stephens was one of the founders of The Plastic club in 1897. She served as vice president every year from 1897 through 1912.

Stephens was also active in the extablishment of the Fellowship of the Academy of fine Arts, and served on the Board for several years.

Her career spanned fifty years, during which time she earned the respect of her fellow artists, male and female. She was active in lecturing and teaching, and in demand as a judge of art and photography. There were numerous exhibitions of her work during her lifetime. In 1984, more than 50 years after her death, the Brandywine River Museum held an exhibition of her work. 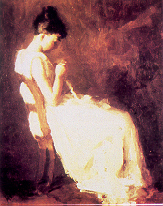