“In general my research revealed the vital importance in the link between the cultural practices of indigenous artisan weavers and wood carvers [whose] work expresses the wonders of nature and the natural world to those actively working to preserve it. Clean waters, flora, fauna and marine life will be represented and pictured in my work of art.”

In November 2016, artist Hope Sandrow traveled to the Indonesian islands of Bali, Flores, and Komodo to connect with traditional artisans of the islands and gain greater understanding of native weaving and woodcarving techniques. During this artist exchange and research trip, Sandrow reconnected with Komodo woodcarvers and Todo weavers and woodcarvers she had met on a previous visit in 1999, using her earlier encounters to help locate them. “I learned there’s literally no ‘road map’ to finding them: a key reason they’re struggling. Why they view participating in our project as ‘a once in a lifetime opportunity to show their work.’ And I see the importance of mapping locations (being onsite with them is the sole medium to speak together) for their work to gain visibility (Google Maps often doesn’t picture these small villages) rather than by ‘word of mouth’ as I do.”
Sandrow traveled to many areas and villages. The first visit was to the Mangarrai Todo Village on the island of Flores, named by the Portuguese in the 15th century to refer to flowers on land and to flowers beneath the sea, including coral, fishes, and other marine life. Here she met with interpreter and guide Bertho Pantung and the former chief of the village Yeremias Tunjuk.
Sandrow had prepared well for the travel conditions in these regions and was supported by her guides and interpreters. “I visited women weavers and their families in the Manggarai mountain villages of Todo, Melo, Cibal, and Waerebo: their motifs and design as well as their fabrics are almost the same.” The artist was advised to visit the villages near the central part of the island (such as Lanaga, Watublapi, and Desa Onelako) and the eastern part, as well as Bama on the coast because the motifs and fabrics differ greatly from the patterns on the west coast.

On the Island of Bali, where Sandrow stayed in the villages of Gianyar and Denpassar, the artist visited traditional weavers and Batik artisans. “Textiles are much more than just cloths from which garments are made. Beginning with the yarn and the woven cloth, they are a medium through which the divine nature of the universe and its material manifestations are recognized and expressed.”

To represent the totality of her research, the artist selected one thread. “I choose the color Orange, because it became the theme of our adventures for many reasons. Concern for Zika and Malaria is why I purchased a khaki-green orange lined sun block hat- which is an exception because I always wear black- embedded with mosquito repellant. The orange matched the orange and white striped sun umbrella brought by an assistant. A few days into our travels the color became emotionally laden: I was given the gift of a hand loomed orange scarf by the former chief of Mangarria Todo Village Yeremias Tunjuk.”

Sandrow also visited Komodo National Park, located in the center of the Indonesian archipelago, between the islands of Sumbawa and Flores. Established in 1980, the main purpose of the park initially was to conserve the unique Komodo dragon (Varanus komodoensis) and its habitat. Here the artist gained greater understanding of the real threat of extinction to several flora and fauna in this area of the world.

“Challenges to retaining cultural heritage are large: changes in climate threaten the supply of natural materials to compose fabrics and carvings as does development of ancestral lands.” While visiting Komodo National Park, Sandrow created a photo diary of fish and coral reserves around the park. “I learned of flora (Coral) and fauna (Green Jungle Fowl, one of the four original ancestors of all domestic fowl, living solely on these islands) facing extinction. Which for me, as an artist, is an important reason to include these in my site-specific work.” 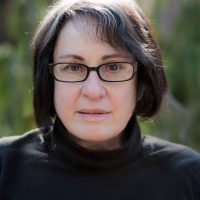 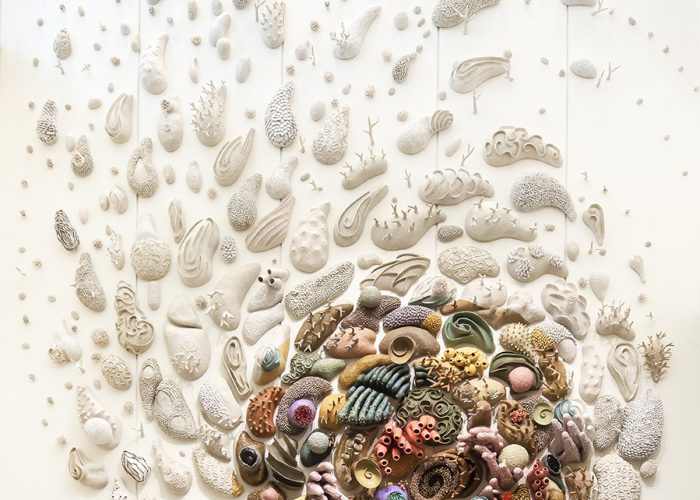 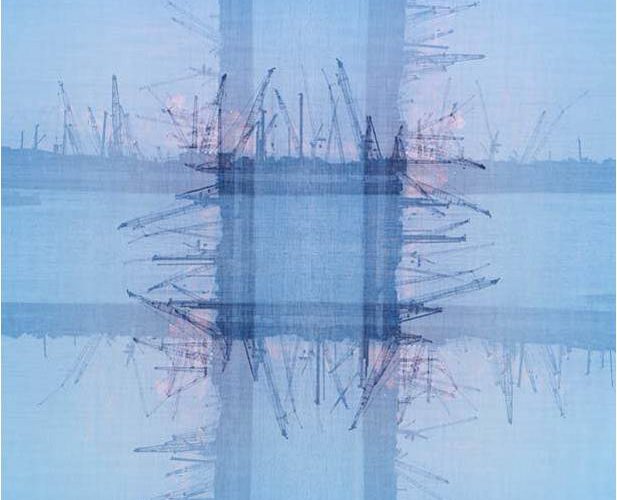