“We were thrilled to have Dan Namingha, a renowned Native American artist, share his work and experience with Chileans and represent the diversity that makes America the great country it is. ‎Art diplomacy makes a difference and is impactful."- U.S. Ambassador Michael Hammer

“We were thrilled to have Dan Namingha, a renowned Native American artist, share his work and experience with Chileans and represent the diversity that makes America the great country it is. ‎Art diplomacy makes a difference and is impactful. As I heard from many who participated in Dan’s events, art brings people together and promotes greater understanding.” – U.S. Ambassador Michael Hammer. Santiago, Chile.

Artist Dan Namingha visited Santiago, Chile, during Native American Heritage Month in November of 2015. A member of the Hopi-Tewa tribe, Namingha is well-known for the way his paintings and sculptures blend traditional Native American elements with elements drawn from modern and contemporary art. Inspired by his heritage, Namingha’s work explores concepts such as the achievement of balance and harmony with nature, and the recognition of connections between physical and spiritual worlds.

Namingha generously agreed to loan one of his large oil paintings entitled Elements of Hopi #3 for the Art in Embassies’ temporary exhibition in the residence of U.S. Ambassador to Chile, Michael Hammer. Working closely with Ambassador Hammer and members of the Embassy’s Public Affairs Section, Art in Embassies organized a four-day cultural outreach program.

Namingha began his series of gallery and studio visits by meeting the members of Taller 99. Established in 1956, Taller 99 (English: Studio 99) represents one of Santiago’s longest standing local arts institutions. Today it remains a thriving collective of over 70 artists, focused mainly on working in print-based media. Namingha met with several of the studio’s artists; together they discussed a variety of topics ranging from the technical aspects of printmaking in Chile to the ways Native American artists often express aspects of their traditions in the context of mainstream media and popular culture.

Namingha also paid a visit to Galeria Patricia Ready, one of Chile’s most important contemporary art spaces. This gallery is well known for showing a wide range of emerging to well-established contemporary artists, as well as a wide-range of artistic styles and media- including conceptual art, photography, video art, digital art, installations and performances. During his visit, Namingha met with representatives of the gallery, toured the extensive collection, and discussed the role forward-thinking contemporary art institutions such as Galeria Patricia Ready can play in developing Chile’s cultural sector.

Drawing upon a range of experiences gained over the course of his extensive artistic career, Namingha also delivered several lectures to Chilean art students. The first was a talk entitled On Color given to the art and design faculty of the Pontifical Catholic University of Chile. Pontifical Catholic University is one of Chile’s oldest universities and among the most recognized educational institutions in Latin America. Namingha also presented two lectures entitled My life in Art. The first was given to 20 students of art and design at the Universidad de Chile, while the second was held at the Universidad Diego Portales’ American Corner. All of the artist’s lectures were well-attended, free, and open to the public.

One of the highlights of Namingha’s exchange was an art workshop he led in conjunction with a Chilean nonprofit organization called “Illuminoarte” to assist a group of mentally disabled men and women between the ages of 20 and 30. In accordance with Illuminoarte’s mission, the event was focused on using art as a therapeutic tool. Namingha helped the participants paint envelopes to be used in the international Artists: Messengers of Peace project and together the artist and the participants explored ideas about how art and creativity can contribute to peace around the world.

On the last day of the exchange, at a reception at the Ambassador’s residence to launch the opening of the Art in Embassies’ exhibition, which brought together artists and diplomats, as well as local business and community leaders, Namingha discussed his experience developing a successful artistic career while not losing touch with the traditional cultural expressions of his Native heritage. 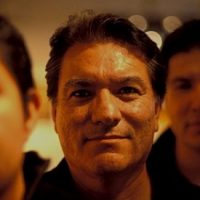