American artist Thomas Paquette collaborated with ART in Embassies in January 2006 for a series of lectures and presentations held in Athens and Veria, Greece.

American artist Thomas Paquette collaborated with ART in Embassies in January 2006 for a series of lectures and presentations held in Athens and Veria, Greece. The purpose of his visit was to promote the ultimate goal of ART in Embassies by expanding cultural understanding through the arts. He was scheduled for a series of presentations in as various locations as Deree College in Athens, to the National Gallery of Athens, to the American Corner at the Veria Municipal Library. Due to uncommonly heavy snowfall, a majority of the events were cancelled by the institutions. The artist found that those audiences at universities and high schools where he was allowed to present were very receptive to his ideas and artwork. Young art students were particularly interested in Paquette’s experiences as a professional and the difficulties he encountered in the beginning of his career in finding an audience for his work. He was able to reach a wider audience beyond the intellectuals and political personalities who find themselves frequent guests of embassy events and to reach out to a local community with his lecture in Veria. Through his visit was secured a stronger bond between Greek youths and the American Embassy in Athens. 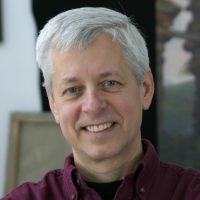