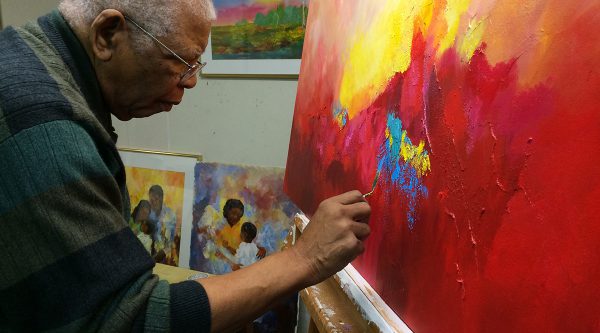 Sharing art and friendship in Jamaica

If there’s a better art and goodwill ambassador from Fredericksburg than Johnny Johnson, it’s news to me. That’s why I was interested to learn that the longtime artist, educator and force for good in the community recently had a special reception and display of his work in Kingston, Jamaica. The art exhibition of some two dozen of his pieces, “Celebrating the Ties That Bind: 50 Years of Friendship,” was done at the behest of the U.S. embassy on that island country. Over the better part of a week in January, Johnson talked about his paintings with visitors and students at the Mutual Gallery in Kingston. He did interviews with Jamaican newspapers and radio and television stations on his work and his approach to art and social commentary.
He traveled to a school of visual arts at Edna Manley College there to talk about art education, and delighted those who crowded into his successful exhibition by talking about the pieces on display. Johnson said he enjoyed the interaction and got a great kick out of one response to his work: that he must have been a Jamaican in an earlier life to display such bright and lively colors. “I don’t know about that earlier life thing, but I was gratified by the response to the exhibition,” Johnson said.
He noted that two things led to the exhibition of paintings that displayed everything from his love of jazz to the struggles of homelessness and social equality. The first was his participation through the years in a program in which artists loan paintings to U.S. embassies around the world. The second was his ties to former Fredericksburg resident Pamela Bridgewater, U.S. ambassador to Jamaica, who hosted Johnson and his wife, Jean, and artist/exhibit curator Kathleen Walsh at the embassy. “Pam was a student of mine at James Monroe High School,” Johnson said recently from his studio on Charles Street. “I used to watch her get on the school bus right here when she was a youngster.”
Johnson’s art career is no secret to those in this area, having started not long after the college basketball star moved here from North Carolina to teach in 1959. To read the second part of the article,click on this link.