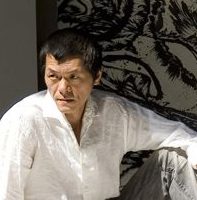 Many art critics have assessed Huang Zhiyang’s work as an interpretation of American abstract expressionism through Chinese techniques. Indeed, the artist lived in New York for several years and studied traditional ink painting at Taipei Chinese Culture University. His familiarity with Western and Eastern idioms is traced onto his biography. But Huang describes his practice as “body writing”—fundamentally different from the work of Jackson Pollock, for example. The Taipei-born artist asserts that even if resulting forms may appear similar, Asian and American approaches are foundationally distinct, just as calligraphy is discrete from painting.

Huang’s oeuvre is imbued with Daoist, Buddhist, and neo-Confucianist thought. His studied reverence for nature can be seen in his choice of media. Working across drawing, painting, sculpture, and installation, he employs mineral pigments, stone, and bamboo to present his organic visions. In his Possessing Numerous Peaks series, abstracted landscape formations carved from marble and white granite are reworked at human scale, foregrounding man’s relationship with nature. Works from this series assume a variety of shapes and holistically present an ecological microcosm: sometimes appearing to be a magnificent mountain or dragon, and other times, a lowly fungus or mollusk. Huang captures the life force in all things living and inanimate, and invites the audience to interact with his sculptural expressions. Viewers may sit, lean, and climb on the works, actively engaging with and observing their surroundings.

Huang has exhibited his work at the 1995 Biennial of Venice, 1994 Taipei Biennial of Contemporary Art, and dozens of solo shows in Beijing, Hong Kong, Shanghai, Taipei, New York, and Aachen. Examples of his work may be found in public and private collections across Asia and Europe. 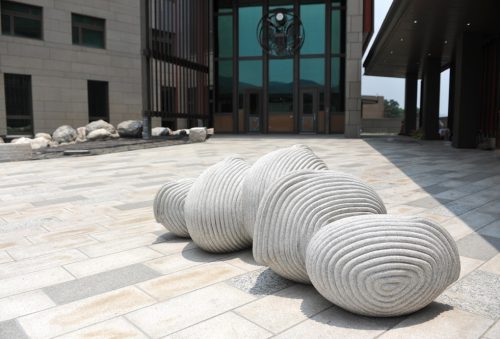