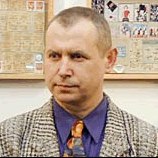 Between 1972 and 1978, Pawlak was a pupil at a secondary technical school and pursued his interests in painting by joining a visual arts club. During the 1979/80 academic year, he began to audit classes in the studio of Rajmund Ziemski within the Painting Department of the Academy of Fine Arts in Warsaw. He officially matriculated into the academy and was a student of the same studio between 1980 and 1985, remaining a member thereof until he graduated. He has been teaching in the Design Department of his alma mater since 1986.

Towards the end of 1982, while still a student, Pawlak became a member of the Gruppa artistic group. He participated in virtually all of the group’s exhibitions and actions and co-edited its publication titled “Oj dobrze juz” / “All Right Already,” in which he published poems, manifestoes and the texts of papers he delivered at various gatherings and conferences. He participated in the independent art movement of the 1980s along with the other members of Gruppa. During this period, he developed the reputation of an artist who was sensitive to the social and political complications of the times of Martial Law. He commented on the situation through sometimes unsophisticated, extremely direct metaphors, as exemplified in the series “Swinie” / “Pigs” (1983), or through symbolic transformations of the five-pointed star of the Soviet Union, as can be seen in the paintings “Czerwony autobus rusza w droge dookola swiata / The Red Bus Embarks on Its Voyage Around the World” and “Droga z piekla do piekla / The Road from Hell to Hell” (1984).

For his thesis project, Pawlak produced a series of paintings titled “Obrazy zamalowane” / “Painted-Over Paintings” (1985). The artist had the intention (which he never realised) of painting over them in the presence of the evaluation committee – at once a gesture of destruction and of solidarity with the anonymous “painters” who were placing political messages on walls throughout Polish cities at the time. In 1986 and 1987, Pawlak produced a series of paintings in which he covered his compositions with an additional layer of masking paint. These works were a highly original transposition of, and artistic comment on, a site characteristic in those years – specifically, political messages covered with additional layers of paint (see “Nie mowie, nie widze, nie slysze / I Do Not Speak, Do Not See, Do Not Hear”, “Skad przychodzimy, kim jestesmy, dokad idziemy / Where Do We Come From, Who Are We, Where Are We Headed”, “Lamanie szklanych rurek / Breaking Glass Rods”).

The artist’s forms changed radically with the series “Tablice dydaktyczne” / “Didactic Tables” (1987-1988). The paintings depicted grids of ideograms, graphs and maps symbolising calculations on knowledge and culture. These canvasses are often compared to school blackboards covered in information, but rendered as negative images (“Rzezba grecka i egipska / Greek and Egyptian Sculpture”, “W kregu kultury europejskiej / Within the Orbit of European Culture”, “Slownik terminologiczny sztuk pieknych / A Dictionary of Fine Arts Terminology”). Immediately following the completion of this series, the artist began to produce his formally homogenous “Dzienniki / Journals” (1989 to today), which in contrast to many of his previous works, were fundamentally non-figurative.

Around this time, Pawlak also created a work that would come to constitute a symbolic break between a time of deep involvement in public issues and a period of focus on private matters. This came in the form of a painting titled “Polacy formuja flage narodowa / Poles Forming Their National Flag” (1989), which depicts the Polish flag painted in the manner characteristic of the artist’s “Journals”, using lines etched into a thick layer of paint. At the same time, the artist created a series of collages which he also titled “Journals” and which were composed of used-up tubes of paint, whittled down pencils, used tickets, receipts, matchboxes, postcards, and the like. At the beginning of the 1990s, Pawlak created a series of paintings about color, beginning with a series that explored the color white and subsequently expanding into other colors. Midway though 1991, the artist created a group of paintings about the figure of Wladyslaw Strzeminski (“W. Strzeminski i K. Malewicz / W. Strzeminski and K. Malevich”, “Alfabet Strzeminskiego / Strzeminski’s Alphabet”, “Dlaczego Katarzyna Kobro… / Why Katarzyna Kobro…”). With these, the artist initiated a dialogue with the history of Polish art, selecting a chapter of it that seemed drastically politicized to him.