For over sixty-five years, William Smith has used his art to tell stories. This exhibition, which he entitles, “High Noon in America” is also the title of the most prominent painting of the exhibit, a thought-provoking piece relative to the philosophy of Martin Luther King, Jr. He is motivated by life’s many lessons and is committed to sharing his stories with others through his art works. Smith considers himself a “modern-day griot – an African storyteller, historian, and entertainer.” His stories, which are generally about African Americans include, portraits, everyday scenes, noted individuals, tragedies and celebrations. He works in various mediums such as acrylic, oil, pastel, pencil, and lithograph.

Born in Sharptown, MD, he grew up in Catonsville, MD where his parents and teachers supported him wholeheartedly and gave him well-deserved praise. He remembers the home as a special place where his passion for art began to flourish. He studied at the University of Arts in Philadelphia, PA, and also did graduate studies at the University of Pennsylvania and the University of Maryland. He was an English and Art teacher for a period and a feature writer for the Philadelphia Enquirer, he has received awards and citations for his work, has participated in numerous exhibitions and is included in private collections, one of which is the Bill Cosby Collection.

William Smith has been chosen to create a sculpture of Harriet Ross Tubman, which is slated to grace Lions Park in Bristol, PA where he and his wife now reside. 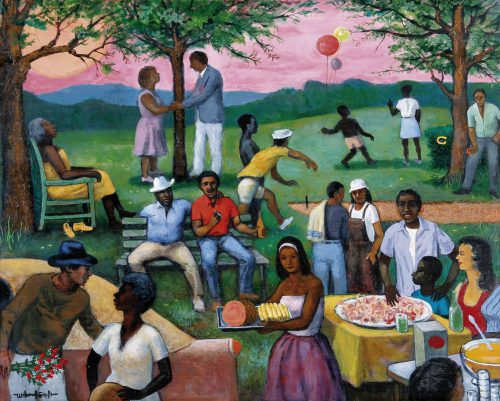