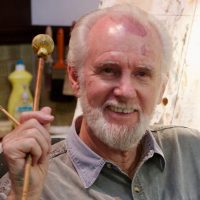 William Cooper painted professionally from 1964 until his death. His career began as a landscape and seascape artist and then he turned his talents to his first love, birds.

In 1992 the Academy of Natural Sciences Philadelphia USA, presented Cooper with their gold medal for distinction in natural history art. He is the first and only Australian recipient in its 190 year history. Then in 1994, Cooper was awarded the Order of Australia (AO) for his contribution to art and natural history.

William T Cooper’s work is held in many collections around the world including The Australian National Library and the New Guinea government who purchased entire collections of his published works. His paintings have illustrated some of the finest books published. He has also illustrated Visions of a Rainforest by Stanley Breeden & Fruits of the Australian Tropical Rainforest by Wendy Cooper. In 2011 he wrote and illustrated Capturing the Essence, a book that illustrates and describes techniques for artists.

Bill Cooper was a naturalist and had drawn for as long as he could remember. His knowledge of his subjects is evident in his paintings and he preferred to draw from life rather than needing to depend on photographs as the main source of material for his work.
[Source: http://www.williamtcooper.com.au/about/]