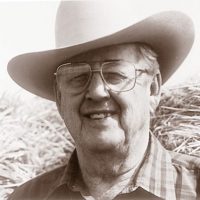 A member and three-time president of the Cowboy Artists of America since 1968, and now a member Emeritus, William Moyers is a painter and sculptor of western subjects. At the age of fourteen, Moyers came to Colorado with his father, a lawyer, who placed him with a family of five boys on a ranch. He worked his way through high school and college as a cowboy and ranch hand, and began selling pictures of bucking horses for 25 cents each.

In 1939, Moyers graduated with a degree in fine arts from Adams State Teachers College in Alamosa and later studied at the Otis Art Institute in Los Angeles, California with E. Roscoe Shraeder, a pupil of illustrator Howard Pyle. To earn extra money, Moyers worked at Walt Disney Studios for a year on the movie “Fantasia.”

In 1943, he and Neva married. She served in the Navy and Moyers in the Army during World War II. They then lived in New York City where Moyers began to do illustration, winning an American Artist magazine competition for illustrating an Owen Wister novel. His career took off, and Neva handled the business side, although she stayed in the Navy until his success was obvious. The couple then moved to Atlanta, Georgia, where Moyers did over 200 illustration assignments. There, they had four children, two of whom are artists – John, also a member of the Cowboy Artists of America, and Charles, a sculptor.

Moyers’ work is in numerous major collections including the Gilcrease Institute in Tulsa, Oklahoma, the National Cowboy Hall of Fame in Oklahoma City, Oklahoma, the Albuquerque Museum in New Mexico and the Cowboy Artists of America at Kerrville, Texas. He has won many gold and silver medals and can be found in prestigious publications including “Cowboy in Art” by Harmsen and “Bronzes of the American West,” by Patricia Broder.

His work is highly realistic, combined with an emotional involvement with the subject, and follows the tradition of Charles Russell and Frederic Remington. “I paint what I do,” Moyers observes, “because I find the working cowboy, past and present, such a harmonious outgrowth of his whole environment. He accepts the action, weather, loneliness, and responsibilities as a normal existence. Too, there is a lot of nostalgia in it for me—a chance to recapture something of which I can no longer be a part.”

He and his wife Neva live in their home in Albuquerque, New Mexico, surrounded by the artifacts of their long life together. 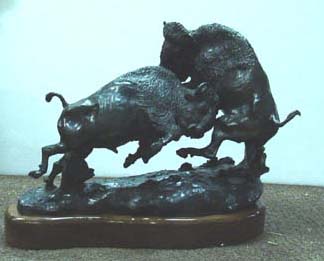