William Lewis Lester, painter and art teacher, son of John Lewis and Mildred Matilda (Padgett) Lester, was born in Graham, Texas. He had nine sisters. He moved to Dallas with his family in 1924 and graduated from Woodrow Wilson High School there in 1929. He then studied at the Dallas Art Institute with Thomas M. Stell, Jr., and Olin H. Travis,qqv while associating with other young artists, including Alexandre Hogue, Jerry Bywaters, Otis M. Dozier,qqv Everett Spruce, and Perry Nichols, among others. (see DALLAS NINE.) He was an active member of the Dallas Artists League beginning with its formation in 1932. During the Great Depression era, the members formed a nucleus of artists who led in the development of a Texas Regionalist style. At the time, Dallas was one of the strongest and most dynamic centers of the regional art movement in the country. In 1938 many of the Dallas artists, including Lester, formed the Lone Star Printmakers. For the next four years they created and exhibited their lithographic prints. The impetus for this activity for these young, financially poor artists was the chance to explore a new medium and to display their work without incurring the higher costs associated with crating, shipping, and insuring paintings and sculpture. Also in 1938 Lester married Sylvia Louise Bachrach of Dallas; they were married for fifty-three years and had two children. 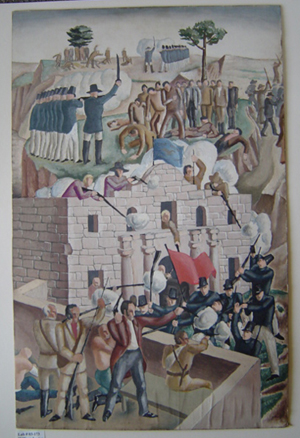